I think it is fair to say that unless you know exactly where to look, it is extremely unlikely that you will ever chance across Pomerol’s Château Lagrange. This statement is perhaps not true of the Château Lagrange located in St Julien on the Médoc peninsula, which lies directly west of Château Gruaud Larose and Château Branaire-Ducru, and is well sign-posted. It is true, however, of the somewhat less renowned château in Pomerol which bears the same name. Hidden close to the waters of the Barbanne, secreted behind some of the appellation’s more famous châteaux, this property maintains an interminably low profile. It is only its position within the portfolio of Etablissements J-P Moueix, one of the appellation’s and indeed one of Bordeaux’s most renowned names, which thrusts it into the Pomerol limelight.

The vineyards of Château Lagrange are situated behind the microscopic hamlet of Pignon, where we find Château La Croix de Gay and Château Fleur de Gay. The diminutive château which looks out across the vines, really little more than a generous maison in the same style as the aforementioned two properties, is today in separate ownership, and there is nothing here to identify it as Château Lagrange. Marking the vineyard and removing all doubt as to its identity, however, are two carved stone posts (one of which is pictured below), traditional for the appellation and similar to those which can today be found at Château Rouget, Château Gazin and Château La Fleur-Pétrus, among others.

The origins of Château Lagrange are, as far as I can tell, relatively recent, in that they begin with the acquisition of the land during the early 19th century. The family that acquired it were named de Jaurias, and they originated from Gout-Rossignol, a commune situated to the east of Bordeaux. It is not as far out as Corrèze, where a number of well-known right-bank families such as the Moueix and Audy lines originated, but sitting to the southeast of Angoulême, on the edge of the Périgord-Limousin national park, it is well outside the Bordeaux region. 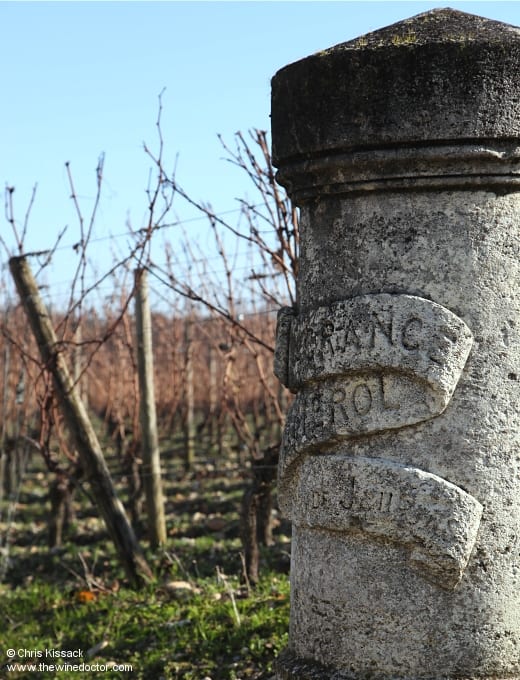 It was during the early years of the 19th century that a branch of this family moved west and settled in Libourne. The instigator of this move was Antoine Hypolithe Aubin de Jaurias (1786 – 1853); born in Jaurias, in Gout-Rossignol, by 1814 he was in Libourne, evidence for which was his marriage there to Jeanne Félicité Bonalgues (1792 – 1874). Antoine was a doctor, and he and his wife seem to have been financially secure, or at least their tenure of Château de Videlot would suggest so. While Videlot is perhaps not a familiar name to wine drinkers, this imposing château sits south of the suburbs of Libourne, not far from Château Quinault L’Enclos. It is an impressive estate, purely residential (in other words there are no vineyards) surrounded by high hedges and cast-iron gates, with gardens in the parc agricole style which run down to the waters of the Dordogne. Today the property belongs to the Moueix family, which tells you something of the story of Château Lagrange yet to come.