There is no shortage of great wines being made in the appellation of St Julien. With cru classé estates dominating this commune’s 920 hectares, accounting for perhaps 90% of the vineyards, led by the likes of Château Ducru-Beaucaillou and Château Léoville-Las-Cases, perhaps this is no surprise. Just one step lower in the 1855 classification we find two other châteaux which, with all the limelight falling on those illustrious second growths, manage to offer not only quality, but also value. One is Château Langoa-Barton, which sits right alongside the D2 as it runs from Beychevelle north towards St Julien. The other is to be found at the western edge of the commune, a final St Julien flourish before the vineyards of the Haut-Médoc take over, in the shape of Château Belgrave, Château Camensac and Château La Tour Carnet. The estate in question is, of course, Château Lagrange.

As well as its wine, Château Lagrange should also be noted is its architecture. Like many other famous names of the appellation, it is graced by a rather attractive 18th-century château, built of a creamy-yellow stone. Sadly I believe it is uninhabited, and whenever I have visited the shutters have been firmly closed. In both respects, however, this is nothing unusual; many Bordeaux châteaux lie empty. What is unusual, however, is the tower positioned on the left-hand side of the château, dwarfing – in terms of height at least – its companion. Added much later, and of Italian design, this tower (pictured below – as best I could, shooting through the trees) would not look out of place if it were towering above a 14th-century duomo in the heart of a Tuscan town. With its tall and square design, and its traditionally arranged Romanesque arched windows – three on the upper floor, two on the floor below and one on the lowest – it is Italian as Chianti, pizza fiorentina and Raf Vallone in The Italian Job. The original one, obviously, not that nonsense Hollywood remake. 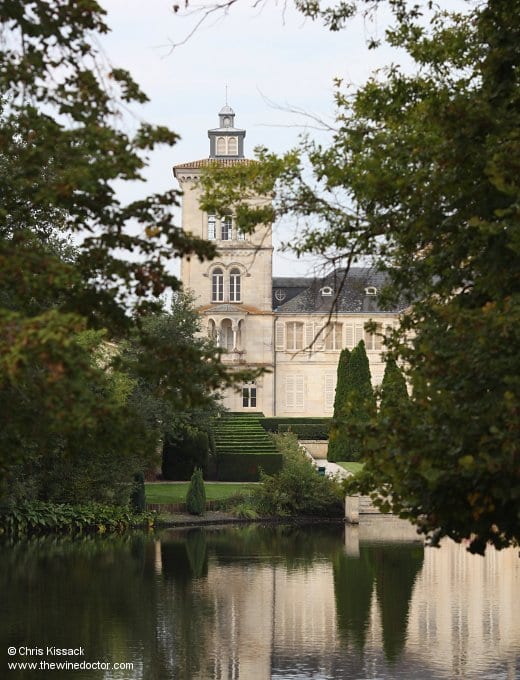 It is not only in the Italianate proportions of its tower that Château Lagrange has cause to look beyond France. This is one of only a small handful of big-name estates in Bordeaux to be in foreign business ownership, in this case Suntory, a Japanese drinks and distilling group. But that is Château Lagrange’s modern history; before than, I have as usual one or two historical details to present.