One of the advantages of the Moueix family’s primeurs methodology, whereby they pull together wines from all their St Emilion and Pomerol estates and pour them at their quayside offices in Libourne, is that within a fraction of an hour I can taste a significant number of wines from the vintage under review. I usually visit first thing in the morning, and it sets a nice benchmark for the day of tasting that follows, particularly for the latter of the two aforementioned appellations. There are, after all, more wines poured here from Pomerol than will be found at the Union des Grands Crus de Bordeaux tasting for the appellation, a sure sign of the significance of the Moueix family for the commune, although it also reflects the rather small representation of the appellation in the Union’s membership. 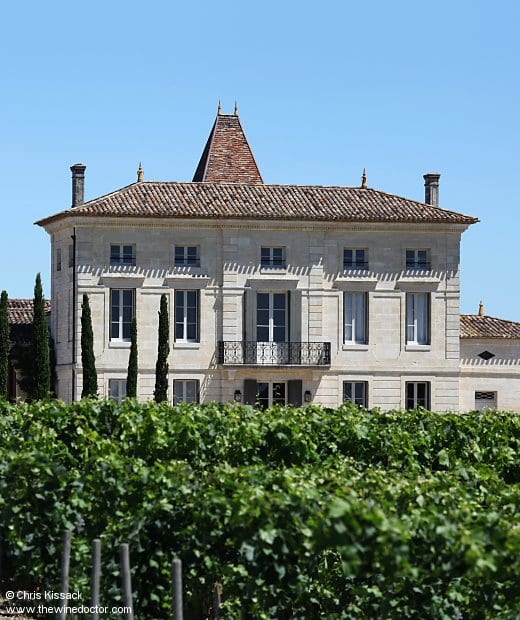 There is also a disadvantage though, and my most niggling concern is that it divorces the wines from their origins. I had, for example, tasted the wine of Château Trotanoy many times before I ever set eyes on the château and vineyard. With Providence this disconnect was just as present, although with a slight nuance. The château occupied a prominent and indeed enviable position, right on the edge of little cluster of properties that constitute the tiny hamlet of Pomerol, in the shadow of the munificent L’Église Saint-Jean which towers above the other buildings. This places it right in the Pomerol heartland, on the plateau of gravel and clay, surrounded by some of the appellation’s most famous names. It is impossible to overlook the château (pictured above), an elegant three-storey maison with doll’s house proportions, the stonework gleaming creamy-white, a row of manicured box trees before it – just out of sight behind the vines in the image above – lending it a picture-perfect appearance. But, thanks to the ‘Moueix disconnect’, I must have driven past it twenty times before I realised – and this was only because, camera in hand, I stopped to investigate – that this château was the home of Providence.

Armed with my new knowledge of Providence, including the location of the vineyards and the château, I set about tasting primeur samples with renewed enthusiasm. Or at least I would have done, if they hadn’t disappeared as suddenly as they appeared. The 2012 vintage was the last I tasted. There was no 2013, hardly a surprise, the old-vine Merlot on the Pomerol plateau being particularly hard-hit that year. Neither Providence nor Hosanna showed up to the primeurs. Then the wine was missing again in 2014, a much better vintage, which seemed strange. During a visit to Pomerol in 2015 all became clear; Providence was no more, absorbed into another Moueix estate, Château La Fleur-Pétrus. I will explain in more detail later; first, some history.