It can be tempting in a relatively small appellation, such as Pomerol, to kid yourself that you have pretty much ‘done’ it. You’ve tasted the greats, such as Petrus and Le Pin. You have thoroughly familiarised yourself with those pretenders to the crown, the numerous great domaines that cluster around the towering steeple of Pomerol’s église. And you’ve worked your way down the slope, tasting your way around the appellation until you get to those good value names that skirt the periphery of the gravelly and sandy terrace. And that’s it. Job done.

Of course, nothing could be further from the truth. Stick your nose into a tasting at the Pomerol syndicat and you will be confronted by a myriad bottles all proudly declaring their allegiance to the appellation on the label, all with very unfamiliar names. Even in Pomerol, the wine writer’s work is never done. And it is not just tiny domaines that can be overlooked. Château Fayat is a case in point. Created in 2009 from the union of three smaller domaines, this estate has 16 hectares of vines to its name, which is for this appellation an unusually expansive vineyard. In this profile I examine the story of how this domaine came to be, before going on to look at its vineyards and the wines.

The story begins with Clément Fayat, who like a number of the Pomerol appellation’s most famous names, arrived in the region after leaving his native Corrèze.

Clément Fayat was a construction worker who came to Bordeaux shortly after World War II. A little over a decade after his arrival, in 1957, he set up in the construction business, in Libourne, specialising in the building of roads. His new venture was a great success, and it grew to become one of France’s largest family-owned companies. Networking with those other old Corrèzians, however, he was advised that if he really wanted to settle in the region, and to be part of it rather than a mere observer, he should buy some vineyards. He seems to have taken their advice to heart, as in 1969 he purchased Château La Dominique in St Emilion. The previous proprietor, Etienne de Bailliencourt, had needed to raise some funds in order to pay a very large tax bill, as well as to buy out his siblings, following their inheritance of Château Gazin. 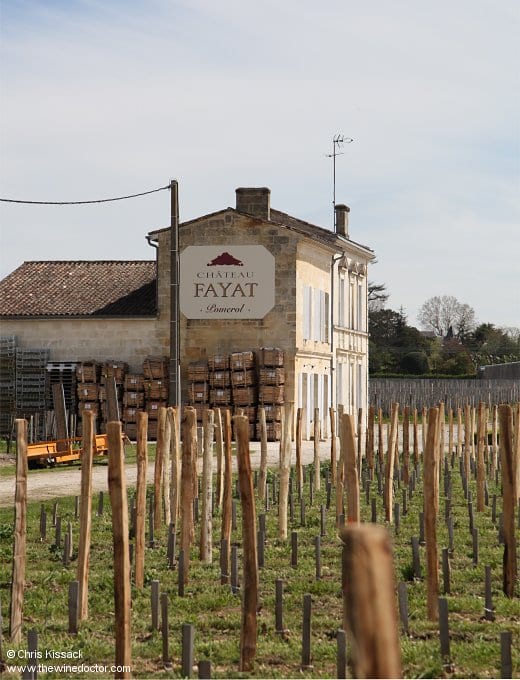 It would appear that Clément’s acquisition of Château La Dominique was insufficient to fully satiate his taste for buying in Bordeaux, and during the 1970s Château Clément-Pichon, a cru bourgeois property in the Haut-Médoc appellation, came onto his radar. He added this to his portfolio in 1976. And for a few years this seemed to be the end of it, save for a little expansion in St Emilion, buying up vineyards that neighboured Château La Dominique. It was not until 1980s that the first seeds of Château Fayat were sown, with the acquisition of a little-known domaine in the backwaters of Pomerol.