It is only through visiting Pomerol, several times if truth be told, that I have finally come to understand its landscape and its wines. Despite having tasted many of this appellation’s wines over the years, I still struggled to get to grips with why some were so much better than others; what made it difficult to grasp was perhaps the fact that the appellation’s many estates all seemed so closely related, huddled together around the tiny village of Pomerol, with its over-sized church, to the north-east of Libourne. There didn’t seem to be any easily recognisable feature, river, hill, slope or otherwise, which defined where the good soils – and were the best wines – were to be found.

I knew for a long time that there was a Pomerol plateau, but it has only been through visiting that I began to appreciate which estates were actually on the plateau, and which ones weren’t. This is not a plateau like that in Conan Doyle’s The Lost World, surrounded by an unassailable escarpment; it is much more subtle than that. But through driving around the appellation, I began to see how the land dropped away to the north, down to the Barbanne, and how this influenced selection and/or the ultimate quality at estates such as Château Le Gay, Château Lafleur-Gazin and Château Le Bon Pasteur. I also saw how the land fell away to the west, where the D1089 runs out of Libourne, and how the soils shifted from clay and gravel to sand, telling me why the wines of Château Montviel, Château L’Enclos and Clos René taste the way they do.

And then, once I had realised all this, I looked back to the plateau and saw estates such as Château L’Église-Clinet, Vieux Château Certan, Château Trotanoy, and of course Petrus, Château Lafleur and Le Pin, perhaps appreciating a little better now the exalted terroir that these estates clearly enjoy. And then I spotted, nestled among them all, Château La Cabanne. This is not an estate with which I was really familiar before I began exploring Pomerol, nevertheless it’s prime position on the gravelly plateau suggests that great things are possible here. Rather like the appellation itself, this would seem to be an estate that warrant further attention.

Writing in The Wines of Bordeaux: Vintages and Tasting Notes 1952-2003 (University of California Press, 2004), Clive Coates asserts that the vineyards now constituting Château La Cabanne were once part of a much larger estate which existed in the 15th century and which also included modern-day Château Bourgneuf, Château Clinet and Château Trotanoy. The name appears to date to about this time and may well reflect the appearance of small huts or cabins (cabanes, of course) where vineyard workers took shelter. 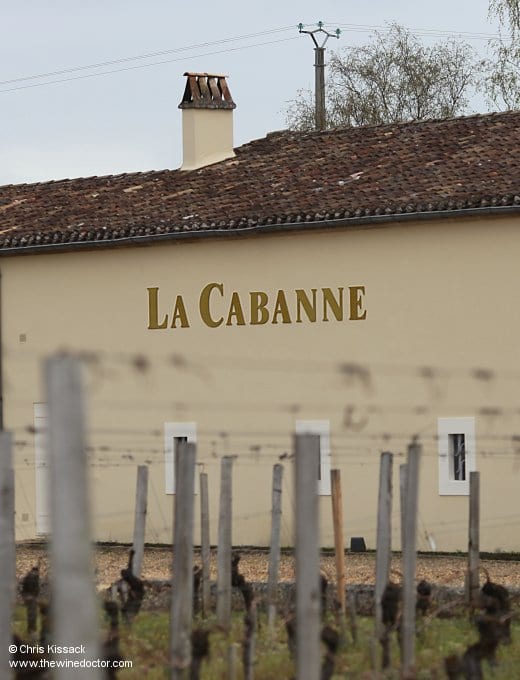 Over the subsequent centuries, details on how the land was developed, and on who the proprietors were, are rather sparse, with most clues coming from the Bordeaux trade bible, Cocks & Féret. Early on it appears to have been in the hands of the Berthomieux family, who were also proprietors of Château Beauregard; they built the château on that estate in the early 19th century, Pierre Bonaventure Barry-Berthomieu (referred to by most writers as Bonaventure Berthomieux rather than Berthomieu) having come through the Revolution with not only his neck intact, but also his fortune. It seems plausible that it was he who also built the little château at La Cabanne, which also dated from the early 19th century.