When heading out of Libourne towards Pomerol the route I nearly always take is the Route de Montagne, the D244 to the less romantic, towards Catusseau. Quite why it is called the Route de Montagne I have no idea; the northern suburbs of Libourne sit at en altitude of about 20 metres above sea level, while the highest points of the Pomerol plateau, where Vieux Château Certan and Château La Conseillante are located, are no higher than 38 metres above sea level. It hardly makes for a mountainous ascent.

Naming curiosities aside, this is still the best route into the vineyards. Once at Catusseau the road forks at a small roundabout, around which a few well known estates are clustered, including Château La Croix St Georges, Clos du Clocher and Château Beauregard. Take the left-hand fork for Vieux Château Certan, Château Certan de May, Petrus and Château Lafleur. Take the right-hand fork for Château Petit Village, Château La Conseillante, Château L’Évangile and Château Cheval Blanc (an honorary Pomerol, in more ways than one). In other words, all Pomerol is laid out before you. 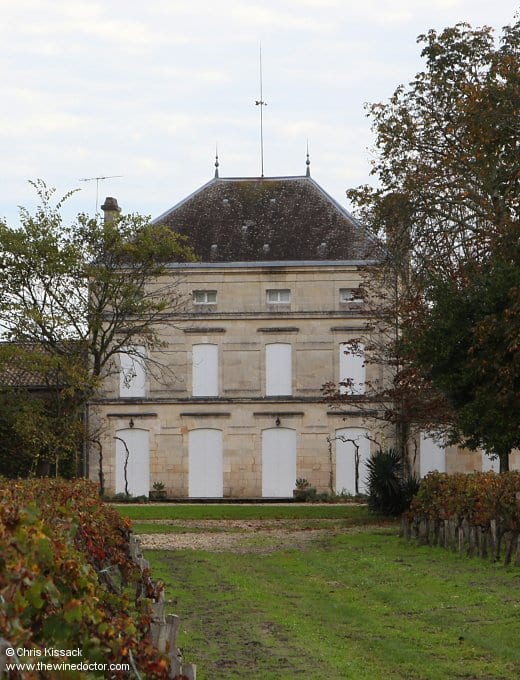 On the way you will spot a number of other Pomerol châteaux, some familiar, some less so. One estate that is hard to miss is Château Plince, just a few hundred metres before the rather imposing Château Nenin, just on the edge of Catusseau. It is not the château you will see, however, but the chai, a rather functional-looking, warehouse-like building, wearing a rather drab grey-yellow hue. Its name is proudly declared in bold red lettering though, easily visible from the road. Investigate further, as I have done, turning right after Château Nenin and then right again along the Chemin de Plince, and you will soon discover hidden behind the chai a rather elegant and compact château. It has doll’s house proportions (as pictured below), and in this it is vaguely reminiscent of Château Teyssier in St Emilion.