It was a dreary Saturday morning, late in October 2013. The Bordelais were still wringing their hands over the just-finished harvest, one that had been blighted with rot and which many already regarded as the worst vintage in thirty years. My mind was occupied with thoughts of 2011 Bordeaux though; I had just finished my reassessment of these wines, freshly bottled, during three days of hectic tasting and a multitude of château visits. With a few hours to spare before I was due to return to the UK, keen to make use of every available minute, I decided to venture once more out into the vineyards of Pomerol to take a few photographs. It had rained heavily overnight but the clouds, still heavy and grey, seemed to be clearing, as the day shifted from the cool dampness of dawn to a brighter, warmer but uncomfortably humid morning. This was exactly the sort of weather, I thought to myself as I loaded my bags into the back of my hire car, that had encouraged so much botrytis and panicked picking just a week or two earlier.

I headed northeast out of Libourne along the D1089, and it was only a minute or so before I turned off, to the left, towards Le Grand Moulinet and René. These are not the grandest vineyards of the Pomerol appellation, which lie on the famed gravel and clay plateau which gradually rises up towards Pomerol and Catusseau on the other side of the road. Here on the plain the soils are more sandy, and the wines made here are perhaps less striking as a result. Nevertheless, there are some well-known names to be found in this locale, Clos René and Château L’Enclos to name but two. 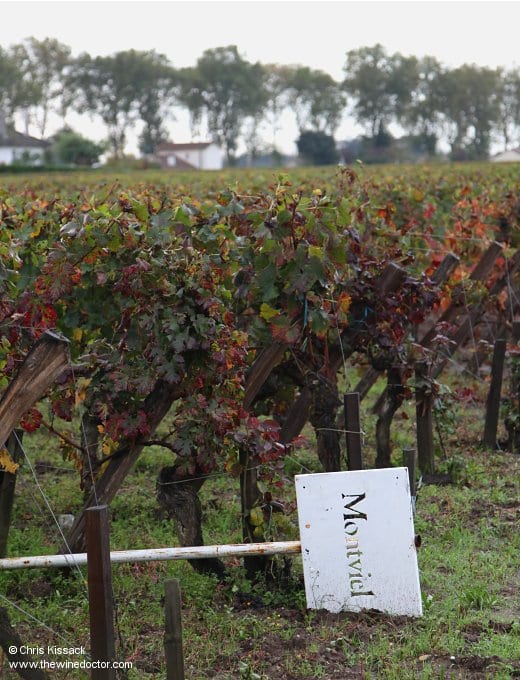 It was as I pulled the car to one side of the road that I noticed the vineyard of another property located here. In Pomerol, and elsewhere in Bordeaux, ownership of vines is frequently indicated by markers placed among the vines, often metal plaques with the lettering punched out. They are, to my eyes, an attractive feature of the vineyards. Here, however, was a rather forlorn looking vineyard marker, seemingly uprooted and lying on its side. The vines were those of Château Montviel, perhaps best known as the first of a number of acquisitions in the commune made by the late Catherine Péré-Vergé. With that in mind, the sight of the fallen vineyard marker laid down on the edge of the vineyard seemed especially poignant; tragically, Catherine had died only a few months before. Her small but handsome collection of Pomerol domaines, including Château Le Gay and Château La Violette, both more recent additions to the Péré-Vergé portfolio, are now managed by her son, Henri Parent. This profile looks specifically at Château Montviel, what we know of its history, the vineyards, and the wines.