When I was a little younger than I am today, and had much younger children, I took the family on a holiday to France’s Atlantic coast, staying not far from Les Sables d’Olonne. Although we had a comfortable residence situated some way inland, we decided one day that we should head down to the coast proper. To take some sea air, I suppose.

Many years later, the memory of that holiday is, on the whole, rather hazy. There have been many holidays since, and quite a few wine trips too (funny how on occasion the two have been combined into one). Those small children that accompanied me along the beach have since turned into teenagers, and now have their sights set on various degrees and their own careers (sadly, none seem to have realised how fabulous a job in the world of wine could be). But there are some memories from that day which, so far at least, remain firmly lodged in my mind. The first is regarding the narrow streets and one-way system of Les Sables d’Olonne, which had me driving around in circles for a while, before I eventually found somewhere to park. The second relates to that walk along the beach.

It wasn’t a long walk by any means, the crisp if not chilly breeze blowing in off the Atlantic Ocean, initially fresh and invigorating, before long cold and biting, would soon see to that. But I was struck by what I experienced on the beach, that chilly wind wrapping itself around not just me but also the towering spears of grey-black rock which, here and there, erupted from the sand. These rocks seemed quite alien to their surroundings, as if they were the remains of some ancient lunar landscape long since covered by the soft, not-quite-golden sand. Which, in a way they were; this part of France sits on the Massif Armoricain, a sheet of rock of truly ancient origin, with forms both igneous and metamorphic. Elsewhere in France these ancient rocks are often hidden, in many cases beneath much younger limestones, but here they remain at the surface, and they play a vital role in defining the style of wine made here. 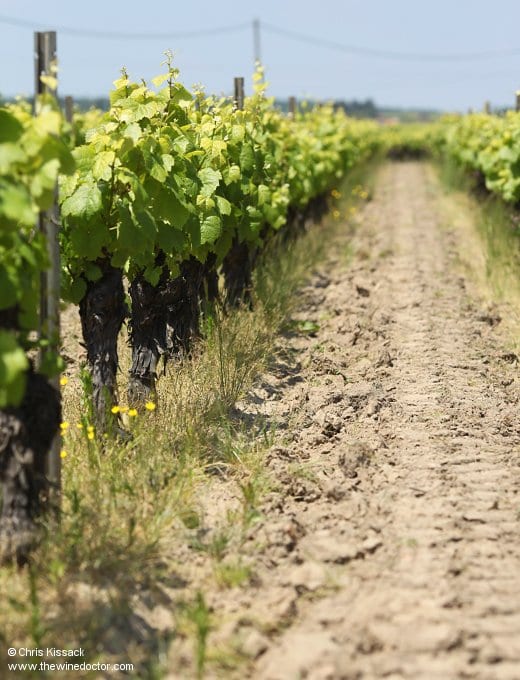 While I walked across the sand (sadly I don’t have any photographs from that walk, so the sandy soils of the Muscadet vineyard pictured above will have to do), from one rocky island to the next, that Atlantic breeze whipped up the water and blew it in, onto me, over me and then inland, towards – somewhere in the distance – the region’s vineyards. I could taste the salt on the wind, and was it just my imagination, but was there also a little suggestion of a fizzing, crackling, ozone-iodine aroma in the air as well?