The story of Clos Beauregard brings together two well-known Pomerol estates, Château Beauregard and Château Taillefer. Château Beauregard lies directly to the north and, as the name perhaps suggests, Clos Beauregard was once part of this larger estate. As such the two have a shared history, up until the first half of the 20th century at least. I shall therefore not repeat the entire history of Château Beauregard here, as it is presented in full detail in my profile. In very brief form then, the Beauregard estate owes its birth in the 12th century to the Commanderie des Hospitaliers de Saint-Jean de Jérusalem, who probably offered lodgings to pilgrims who were en route to Santiago de Compostela , the pilgrimage route running along the Route de Saint-Jacques de Compostela, just outside Beauregard’s front-door. Little is known about life on the estate during the next five hundred years, and it is only with the tenure of the Beauregard and Chaussade families, during the 17th and 18th centuries, that the story begins to crystallise once more. Thereafter the estate went into decline as the vineyards were replanted with madder by Pierre-Elie Barry-Berthomieu, during the post-Revolutionary years, and it remained in the doldrums until it was eventually rescued by Raymond Clauzel and his descendents, starting in 1922. 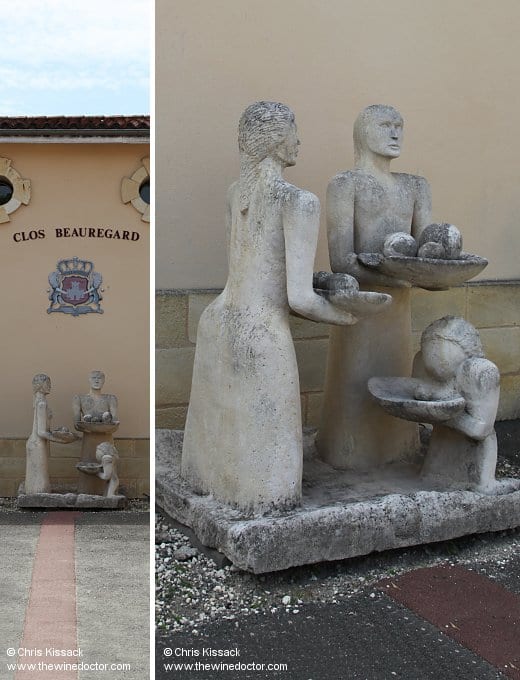 It seems to have been under the direction of the Clauzel family that a section at the foot of the Beauregard vineyard was sold off, thereby giving rise to Clos Beauregard. The vines were acquired in 1935 by Antoine Moueix, the proprietor of Château Taillefer. Antoine had arrived in the region from Corrèze, one of a great influx of agricultural folk that arrived from the region. The Moueix family arrived in at least two stages, but Antoine was the first (his brother Jean, whose descendents Christian and Edouard are perhaps the best known members of this dynasty today, followed him some years later). Antoine was also therefore the first to move from working purely as a négociant to owning vines, and this he did with the purchase of Château Taillefer in 1923. He went on to purchase several other vineyards in Pomerol and St Emilion; Clos Beauregard he acquired in 1935.

The estate remained in the hands of the Moueix family for many decades, and although there was seemingly no shortage of facilities on the domaine the wine seems to have been vinified at Château Taillefer during their tenure. Perhaps the facilities at Clos Beauregard were inadequate, or perhaps it was just easier this way; after all, the Taillefer estate is less than a kilometre to the west, and it was probably already well equipped. Indeed, writing in Pomerol (Jacques Legrand SA, 1984), Bernard Ginestet mentions Clos Beauregard as a mere footnote in his account of Château Taillefer. At this point the responsibility for the Moueix estates, including both Château Taillefer and Clos Beauregard, appears to have been passed from Antoine Moueix, who died in 1955, to his son Jean-Marie Moueix, and then to the next generation Marcel Moueix. Marcel died in 1975, and the running of the family business then fell to his brother, Armand, and his son, Jean-Michel; nine years later, as noted by Legrand, the estates remained in the ownership of the héritiers Marcel Moueix.