Although today this estate is run by the Bourotte family, son Jean-Baptiste having taken over from father Pierre in the early years of the 21st century, for many years the story of Clos du Clocher is intimately intertwined with the name of Audy. The story begins in a distant land, far to the east of Bordeaux, a commune named Corrèze, which lies in France’s Massif Central. It was from here that the Audy family originated, and as far as we are concerned we begin in the late 18th century with the birth of François Audy (1773 – 1825). The records concerning François are surprisingly detailed, and I have managed to trace his ancestors back as far as Léonard Audy (died 1748), three generations hence, but I will take up the story with Francois.

François Audy was the son of another François Audy (1744 – 1809) and Antoinette Courtine (1747 – 1827). We know that he married twice, the first time to Lègère Monteil (1777 – 1810) with whom he had three children, and then to Antoinette Audy (born 1797), a cousin with whom he had a further eight children. This was thus a very large and extended family. One child in particular, Antoine Audy, is of interest to us.

Born in 1826, the year after his father’s death, Antoine Audy grew up in Corrèze and married a local girl from Meymac named Marie Bournel (born 1834). They had one son, Laurent Philippe Audy (born 1859), and in order to find work they left Corrèze, and came to Bordeaux; what Antoine did in the region is not clear, but there is nothing to suggest that he was working in viticulture or wine. This cannot be said of Laurent Philippe, however, who seemed to enjoy some success in this respect, as in 1900 he acquired Château Jonqueyres, an attractive hill-top estate in the Entre-Deux-Mers.

By this time Laurent Philippe was married, to Catherine Masmichel (born 1862), the two having wed on September 18th 1880. Together they had three children, two sons and a daughter. One son named Jean-Louis Audy died relatively young, not long after he was married, leaving behind a widow and a son. The other two children were Adélaïde (1890 – 1986) and Jean-Baptiste (1882 – 1961). Adélaïde eventually inherited the aforementioned Château Jonqueyres, and it remains in the hands of her descendents today, but it is Jean-Baptiste Audy who is of most relevance to the story of Clos du Clocher. 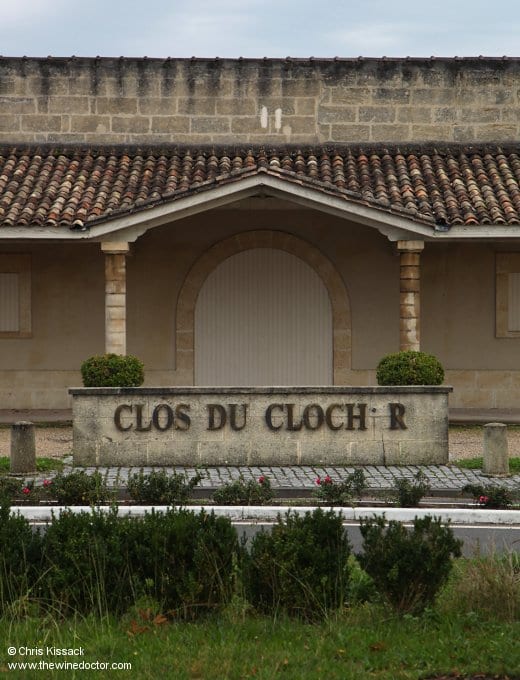 As a young man Jean-Baptiste Audy married Hortense Demathieu (born 1890), the daughter of a wealthy négociant and proprietor named Antoine Demathieu. I have a suspicion that she was his brother’s widow, as he had also married a Demathieu, although I cannot be certain. This was sometime around the turn of the century, and Jean-Baptiste subsequently set up as a négociant, with offices on the Quai du Priourat in Libourne, in 1906. He suddenly appears to be the successful businessman, and perhaps his wife’s dowry, as well as assistance and advice from his father-in-law, were significant in this transformation. Sometime later he branched out, making the transition from mere négociant to proprietor; this began in the 1920s when he acquired a parcel of vines on the plateau of Pomerol, within sight of the Église-Saint-Jean, which today towers above the rooftops and vines of this commune.