The only way to really understand wine, a wise friend once told me, is to taste, taste, taste. He wasn’t wrong of course, although these days I would add another level to this statement. To truly understand a wine, you must know the region from which it comes. And to understand a wine region you have to visit it. Not just a fleeting visit to one or two top domaines feted by famous critics, but all domaines at all levels. And most importantly of all, you have to get out into the vineyards, understand their geology and topography. It’s not just about fancy lunches and back-slapping. Grasp the terroir, and you will understand the region, and also its wines.

So it was one Saturday I found myself, once again, in Pomerol; I was right at the centre of the appellation, on the doorstep of the village of Pomerol itself. All around me were famous names; Château Certan de May, Vieux Château Certan, Petrus, Château Lafleur and Château Le Gay, to name just a selection. But the château I was looking for – Château Hosanna – seemed fairly elusive. I had found the vines, as indicated by a vineyard marker (pictured below) but there was no château. I could see Château Providence, over the wines behind me, often mistaken for and mislabelled as Château Hosanna, but no sign of something that could be Hosanna itself. The explanation for this failure is simple; there is no Château Hosanna. That there is so should perhaps come as no surprise, Hosanna having probably been created when the vineyard was cleaved off a larger section of the original Certan vineyard, itself already divided. Keep dividing a vineyard, and eventually there aren’t enough châteaux to go round, no matter how many farmhouses and barns you spruce up and award this title.

To understand the purported origins of Château Hosanna, from a twice-divided estate, we have to look back to the Certan estate of the 18th century. 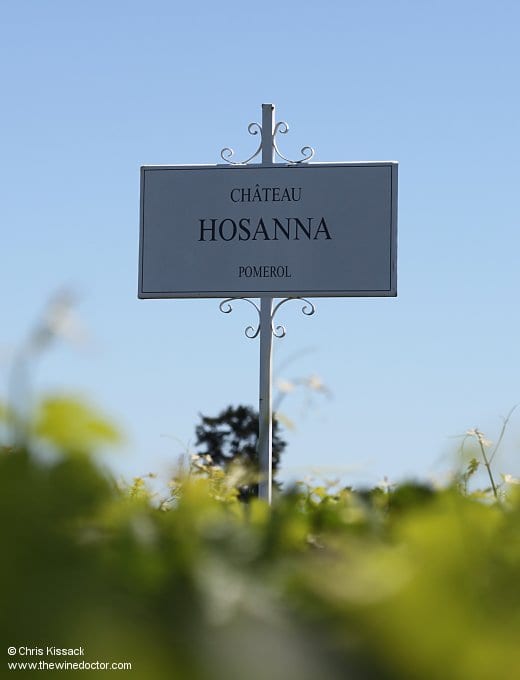 I have therefore already explored the ancient history of this estate in some detail, beginning in my profile of Château Certan de May, and I shall not go over the same ground here. I should take up the story with the moment when the vineyards of Château Hosanna were first cleaved from the parent estate; the problem is, identifying exactly when this happened has proved to be rather difficult.