The tiny hamlet of Maillet, situated near the eastern edge of the Pomerol appellation and barely a pace or two from the boundary between this appellation and St Emilion, seems to consist entirely of buildings dedicated to wine. There are several diminutive châteaux, humble dwellings compared to the likes of Petrus and Château Nenin, which are grand palaces by comparison, and yet they are still beautifully presented. And there are large cellars which cluster around the roadside, their doors open, spilling hoses and buckets and all the other appurtenances of the Bordeaux chai onto the tarmac.

There is one very well known estate based here, its fame down to its long association with Michel Rolland, Château Le Bon Pasteur having been in the hands of the Rolland family for many years before he was forced – because his brother wanted out – to sell the estate in 2013. There are one or two others neighbouring this château that are also worth knowing about though, one of which is Château Vieux Maillet. 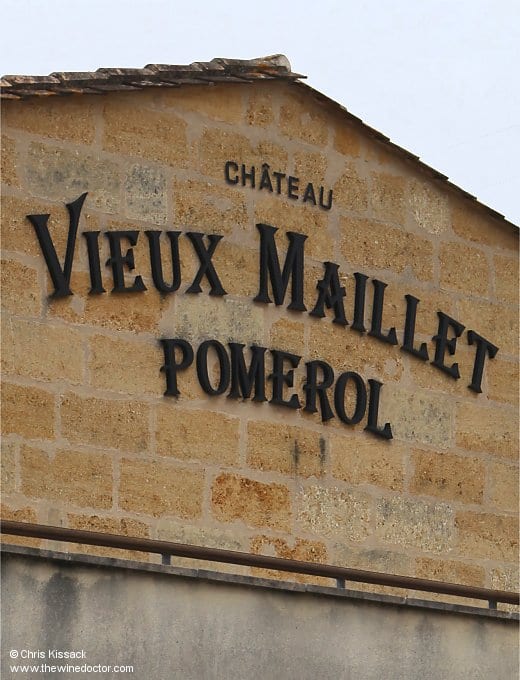 The origins of Château Vieux Maillet are rather vague. Looking back to the 1922 Cocks et Féret we can see that there were three vignerons working the land at Maillet; these were a viticulteur named Laguiens, a Pierre Naud and a Madame Gros, who were each turning out 10, 8 and 6 tonneaux per annum respectively. We know that Château Le Bon Pasteur came to the Rolland family from the Dupuy family who had owned this estate since at least the 1920s, so any one of the above-mentioned vignerons could have been farming the precursor of Château Vieux Maillet. It is not, however, seemingly possible to determine which.