Having finished at Château Cheval Blanc and with barely an hour or so free in my schedule before my next appointment at Château L’Église-Clinet, I allowed my hire car to coast to a stop at the side of the road. I had a mind to visit Château Taillefer, but I needed to telephone to ensure that Catherine Moueix was home, and expecting me. I telephoned the number once, and got voicemail. A second time, voicemail again. I could have left a message of course, but that’s not much use when I want to pop round in the next five minutes, so this wasn’t looking too promising. I suppose I could always just drive up and hammer on the door, or shout through the letterbox, I thought to myself, but it might not be the most professional way to confirm that I really did have an appointment.

A few text messages later, however, I was in possession of a mobile number for Catherine herself, and I gave it a go. A finely enunciated female voice answered; success, it was Catherine. I launched into my best Franglais, my personal blend of French and English, occasionally punctuated with long, hopeless pauses and maybe the odd moment or two of pointing. Unfortunately, pointing doesn’t work on the telephone (how long will it be before the age of videophones makes that statement seem ludicrously outdated, I wonder), and as a consequence telephone calls in French are always a lot harder than speaking face to face. No matter, as it turns out I understand Catherine, she understood me (I think), and ten minutes later I was at the Château Taillefer offices, waiting for her and her daughter Claire to arrive. 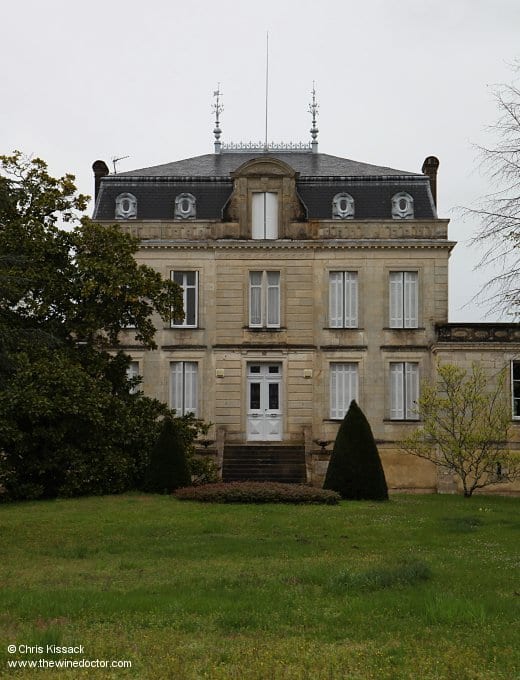 The story of Château Taillefer can be traced back to at least the late 18th century, when the map drawn up by Belleyme in 1785 clearly indicates that the lieu-dit has been named Taillefer, and that there is already a small plot of vines planted here. The name seems suggestively similar to Tailhas, a small stream nearby that forms a small section of the boundary with the St Emilion appellation. Nevertheless, even though when I later walked out in the vines with Catherine Moueix she readily pointed out the line of trees to the south-east that mark the course of this stream, she is quite adamant that the name is derived from taille fer, meaning to cut iron. This is a reference to just how difficult it is to work these hard soils, which are rich in the ferrous mineral known locally as crasse de fer.