The Saturday at the end of the primeurs tasting week is a time to wind down, both for the proprietors, winemakers, technical directors and other staff who have been busy pulling corks and pouring their recently bottled barrel samples, and also for the writers, journalists and wine merchants (and those who are just there for the parties) who have spent the last four or five days immersed in those very same samples. Most of the latter group will have left on Friday evening, eager to fly home and probably enjoy a lazy Saturday lie-in (and I don’t blame them). I tend to stick around on Saturday though, because the châteaux and vineyards, which have been bustling with visitors (in the case of the former) and horses (in the case of the latter – funny how they always appear during the primeurs week) are deserted. Bordeaux is suddenly void of any sign of human life, a huge viticultural Marie Celeste. I often take advantage of this weekend serenity to update my personal bank of Bordeaux photographs.

The focus of my end-of-primeurs photography day in 2015 was St Julien, so having snapped away at Château Ducru-Beaucaillou, Château Léoville-Las Cases and its Léoville neighbours, as well as Château Saint-Pierre, Château Gloria and the less well-known Château du Glana, all dotted along the D2 as it heads northwards first through Beychevelle and then St Julien itself, I headed inland away from the main road. Here in the western reaches of the appellation we find Château Lagrange, and Château Talbot of course, but before I came to either I drew my lawnmower-engined hire car to a halt at the entrance to Château Gruaud-Larose. And I stared. And then I stared some more. 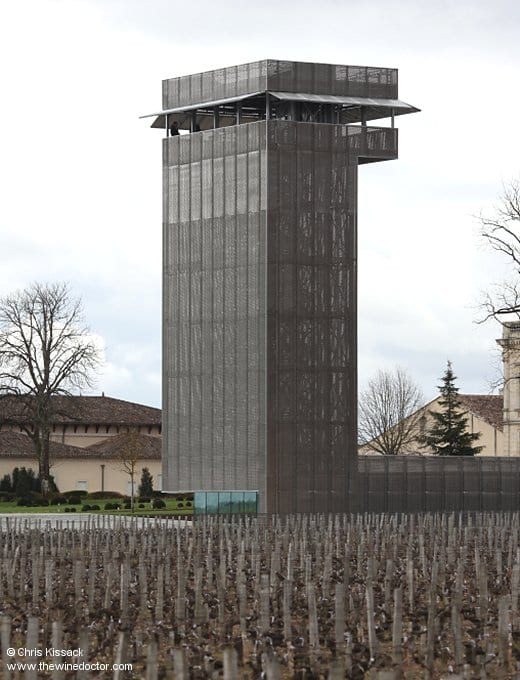 With those estates on the D2, the road which runs north-south up the Médoc alongside the Gironde and which I might drive up and down half-a-dozen times every day when in Bordeaux, proprietors could not even repaint a window frame without me noticing. But it had been a few years since I turned my car inland towards Château Gruaud-Larose, and in the interim since my last visit something other-worldly had landed in the vineyard, close to the château and its ancient tower. A gigantic monolith, in gunmetal grey, was my first impression. But then I noticed a small row of open panels along the top, just before I perceived tiny humanoid figures looking back out at me. My thoughts quickly flew from Kubrick’s 2001: A Space Odyssey to Spielberg’s Close Encounters of the Third Kind. I knew Bordeaux was popular, but I hadn’t realised its renown was pulling in intergalactic visitors. If the edifice had suddenly risen up from the ground, hovered momentarily and then glided noiselessly above the vines in the general direction of Pauillac, presumably heading for its next appointment at Château Pontet-Canet, I don’t think I could have been any more dumbstruck.