The origins of Château L’Enclos really seem to begin in the mid-19th century, with the Larroucaud family, although some authors have attempted to delve further back to look for an earlier or alternative origin for the estate. In particular, writing in Grands Vins (University of California Press, 1995), Clive Coates raises the possibility that the estate originated from L’Enclos du Presbytère, a plot of vines in the possession of a local priest which was cited in the earliest editions of the Bordeaux bible, Cocks & Féret. Even Clive admits, however, that this appears to be a distinct estate from that we know today as Château L’Enclos.

Indeed, the origins of the estate seem to be strongly associated with the aforementioned Larroucaud family, who were propriétaire-cultivateurs in the region long before L’Enclos was born. The family tree can be traced back to Joseph Larroucaud, who was probably born in the latter years of the 18th century. He married Jeanne Arnaud in 1816, and together they had six children. Three were daughters, strangely all called Claire (I assume some died in childbirth or infancy, and the name was subsequently reapplied) but they also had three sons. Of these three sons just two, Jean and Barthélemy, are relevant to the story of Château L’Enclos. 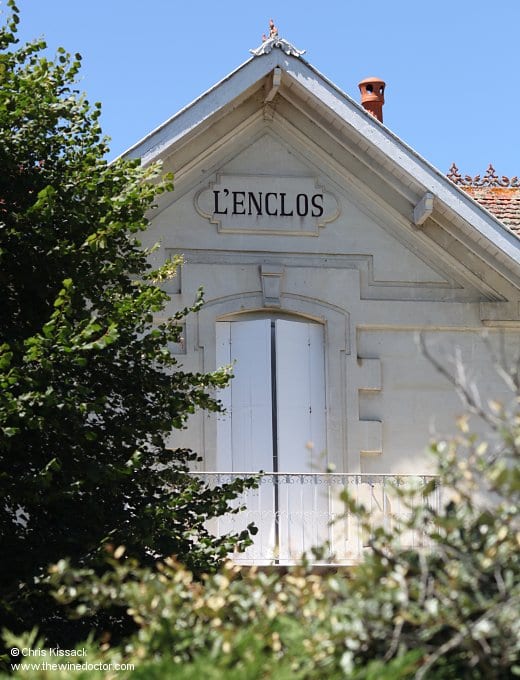 It is Jean Larroucaud who is first recorded as owning vines, cropping up in the 1868 edition of Cocks & Féret as the proprietor of an estate named Au Grand Moulinet, a domaine clearly associated with the hamlet of the same name. Jean was married to Marie Vigneau and together they had three children, of whom only one, also named Marie, seems to have survived to any age. When Jean Larroucaud died in 1883 his daughter would have been 34 years old, but she did not inherit the estate, perhaps because it was felt it should pass to a male heir, or perhaps she was unwell; she died not many years later, in 1891, at the age of just 42 years.