The name of Clinet is now a well-known one in Pomerol. It is also, since a revitalisation during the 1980s, a very respected name, the wines made here today being of very high quality. The estate is on a roll, enjoying a long period of success that can be traced back at least to the 1989 and 1990 vintages when, after the disappointment of Clinet in the 1960s, 1970s and 1980s, the wines suddenly seemed to exceed the expectations of all those who tasted them.

Perhaps this fame is one reason is why, when I first set eyes on the château a few years ago, I was so taken aback by its appearance. I was expecting a typical Pomerol farmhouse-come-winery, like that at Château Lafleur or Château L’Église-Clinet, just two of Clinet’s illustrious neighbours. For Pomerol, however, it is actually a fairly grand affair; not as grand as larger châteaux, such as Château Taillefer or Château Nenin, of course, but it is of a reasonable size, and certainly more imposing than the ferme-like constructions that are found on some estates. In addition, its sharp lines are built from a creamy-white limestone, and it is in pristine condition, every corner keen and bright, every surface glistening in the Pomerol sunshine. Most attractive of all, its appearance is lifted by its shutters, which are painted a saucy flame red. It is not only appealing to the eye, it has a sense of fun. The property seems to have an air of youth, of a domaine on the up, as opposed to one or two properties in Bordeaux I can think of where tired facades suggest a more languid and crusty proprietor.

Indeed, having been installed at the age of 23, just a few years after the millennium, even today proprietor Ronan Laborde is still very young. He is one of a new generation in Pomerol, some of whom are doing very significant things with domaines which were, in some cases, languishing. This isn’t quite true of Château Clinet, where the revitalisation really began under a previous proprietor back in the 1980s, but Ronan’s contribution over the last decade is not to be sniffed at. This profile looks at his role here at Château Clinet, in the vineyards and in honing the winemaking, but first I look to the origins and history of this estate.

Any discussion of origin is bound to focus on the presence of a number of estates neighbouring Château Clinet that also bear this name, with Denis Durantou’s Château L’Église-Clinet literally just around the corner, and Château Feytit-Clinet a short distance down the road. All three owe the Clinet component of their names to the existence of the lieu-dit of Clinet which was named several hundred years ago, at the very least, as it is marked as such on the Belleyme map of 1785. 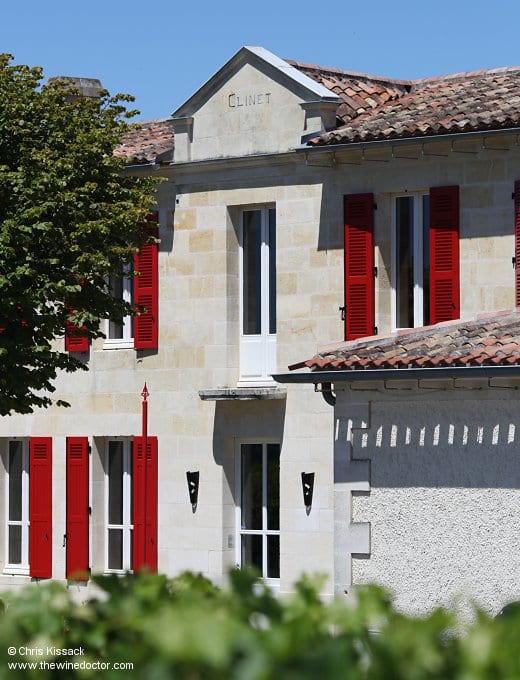 How this lieu-dit came to be so named, however, remains uncertain. There doesn’t seem to be any real indication of its origin, although it seems likely that the land was quite simply once in the possession of somebody named Clinet. Writing in Histoire de Pomerol (Imprimerie Libournaise, 1946), historian Jean-André Garde notes that the names Clin and Clinet were certainly in use in the region during the 16th and 17th centuries, but helpfully he informs us that these were fashionable forenames, rather than a family name passed from one generation to the next. Many estates derive their name from the surname of those that once owned the property, but it would be most unusual for land to take on a proprietor’s first name. Ultimately, the exact origin of the name Clinet remains uncertain, and as is the case when delving into the history of many of the leading estates of Pomerol, we are left to speculate and suppose.