A few years ago, browsing a wine list, I came across something which – within the confines of my cellar, at least – had to be regarded as a curiosity. The bottle in question was a Pomerol. Nothing unusual in that, naturally. What made the bottle stand out in my personal drinking history was that it hailed from the 1993 vintage. I have always habitually avoided buying anything from the rather dire triumvirate of vintages that followed 1990, but on this one occasion I broke my self-imposed rule, and as it turned out, it wasn’t as unwise a decision as you might think. This is not a bad wine at all. Not a great wine either, of course, but taking into account the vintage it should probably be regarded as a success. To turn out a good wine, in a very weak vintage, is a true test of a winemaker’s talents. My admiration for Château La Fleur de Gay and its proprietor at the time, Noël Raynaud, grew considerably.

The château in question is located on the periphery of the Pomerol appellation, and I have to confess I had tasted the wine and driven past the estate a few times before I ever really understood how Château La Fleur de Gay and Château La Croix de Gay, which on viewing the two roadside châteaux appear to be neighbours, were related. The former is often taken to be a super-cuvée produced by the latter; this is an erroneous view, though, even if the wines are made by the same estate (as the two attractive châteaux were both in the ownership of Noël Raynaud, and remain in the hands of his descendents today). The wines bottled as Château La Fleur de Gay have distinct origins, from specific sections of vineyard on the Pomerol plateau, and this property certainly deserves its own profile. 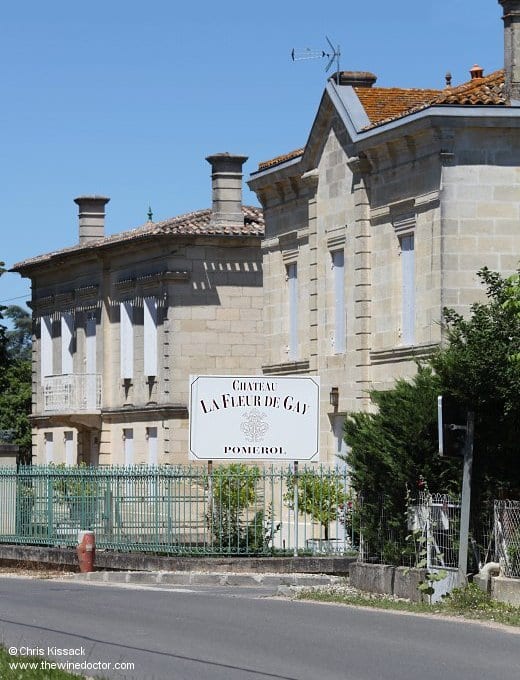 The true origins of Château La Fleur de Gay seem lost in the mists of time. The only reliable information concerning the land here dates to 1477. It is Jean-André Garde who reveals, in Histoire de Pomerol (Imprimerie Libournaise, 1946), that at this time two brothers, Mathelin and Michel Barraud, received permission from the Knights Hospitallers of St John to work the land here, land which was subsequently known as the tènement de Barrauderie, named for the brothers. This land covered an area which corresponded to the modern-day estates of Petrus, Château L’Évangile, Château la Conseillante, Vieux Château Certan, Château Petit Village, Château Gazin, Château La Croix de Gay and of course Château La Fleur de Gay. Garde described the brothers as “two poor labourers” and notes that the land they were given was “close to being a desert”. It was clearly not a choice piece of agricultural dirt that they had been granted. Nevertheless, it was a new beginning for them, and presumably they made the most of it.