It is perhaps only natural that when we think of Pomerol our minds turn first to the great names of the appellation, so tightly clustered on the gravel and clay of the central plateau. These are, after all, the most famous names, the prestigious terroir they enjoy reflected in the grandeur of their wines, and in their occasionally (or should that be frequently, or perhaps permanently?) hefty price tags. In my exploration of this appellation, however, I have been careful to ensure that I also peer into the recesses of Pomerol, the forgotten corners where the terroir might not be so desirable, but where dedicated winemakers can still turn out wines that are frequently charming, often delicious and on occasion even quite fabulous.

The most obvious corners to explore are along the eastern and northern borders of the appellation, where Pomerol becomes St Emilion, or where the land slopes down to the Barbanne, the little stream that forms the boundary between this appellation and Lalande-de-Pomerol. Alternatively, there are the vineyards to the west, beyond the D1089, where the sandy soils allow for a softer, more approachable style of wine. Both the road and the sandy soils on which it sits turn eastwards though, to run across the top of Libourne, and here too there are a handful estates worth knowing about. Sandwiched between the plateau and Catusseau to the north, and the D1089 and the suburbs of Libourne to the south, can be found the likes of Château Taillefer, Château Plince and the subject of this particular profile, Château Bonalgue.

Although today it is the descendents of the Audy and Bourotte families than run Château Bonalgue, its very existence is down to the Rabion family, and in particular Antoine Rabion, a respected military officer who lived through the Revolution and came to serve under Napoleon. Antoine Rabion had been born on March 28th, 1768 in Lussac, which is close to St Emilion and of course the centre for one of the two St Emilion satellite appellations today. Having given good service to Napoleon he had risen to the rank of captain, but he then retired from military service, acquiring the land at Bonalgue in 1798. Napoleon subsequently honoured Antoine by making him a chevalier in the Ordre National de la Légion d’Honneur, which had been established by Napoleon on May 19th, 1802. 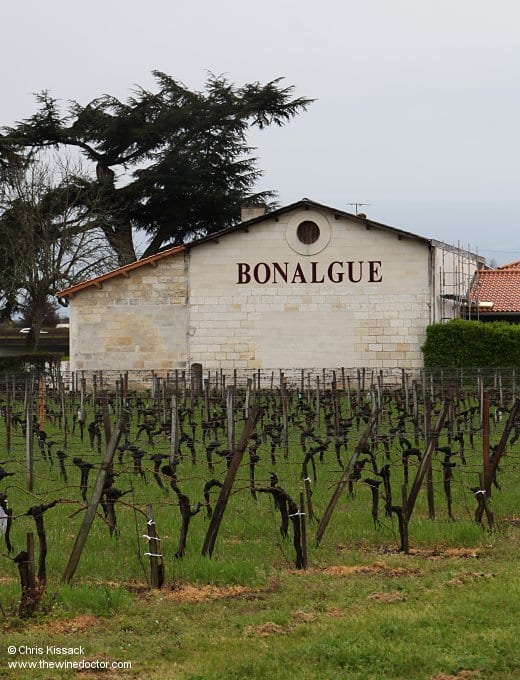 It was therefore Antoine who established the estate which was soon referred to as Clos Bonalgue. The origin of the name is not clear; it may be that of a long-forgotten proprietor of this slice of land, or it may perhaps be derived from bon alge, meaning fresh water, a reference to the deep well on the estate. The definitive answer isn’t known. What is known, however, is that Antoine Rabion married a young lady named Marie Marceline Queyroy in 1808, and they had a daughter Marie Joséphine Rabion, born 1809. They needed somewhere suitable to live, and perhaps this is why Antoine built the château at Bonalgue, the one that still stands today, in 1815.