Just along the road from Château Le Gay, in the northern reaches of the Pomerol appellation, lie the twin estates of Château La Croix de Gay and Château la Fleur de Gay. They are hard to miss; sitting at the roadside in the hamlet of Pignon the two châteaux proudly declare themselves with large signs that hang, almost facing one another, on the iron railings that surround each of the buildings.

Their story is somewhat unusual; that of Château La Fleur de Gay in particular seems to have the power to confuse. This estate, erroneously considered a super-cuvée by some, is in fact nothing of the sort. Although cleaved from Château La Croix de Gay just as Eve was cleaved from Adam, today this is a distinct wine coming from a distinct terroir which deserves separate treatment.

As for Château La Croix de Gay, this estate is unusual in that, having grown in size in a piecemeal fashion over the years, the vineyard is once again a tiny one, amounting to barely a few hectares. This contraction was the result of one family member, a well-known gentleman named Alain Raynaud, selling off his half of the domaine, seemingly the culmination of years of dispute between him and other family members. But this is recent history; before we come to these new developments, I will take a look first at the origins of the domaine, and how it has evolved in the last two centuries.

As with many estates in Pomerol, Château La Croix de Gay seems to have the potential for a grand and illustrious history, but much of it appears to now be lost in the mists of time. The only truly ancient connection may be through the Barraud family line; documents from 1477, mentioned by Clive Coates in The Wines of Bordeaux: Vintages and Tasting Notes 1952-2003 (University of California Press, 2004) indicate that the Barraud family maintained a smallholding in the region. The Barraud family crop up again, much later in the tale of this domaine. 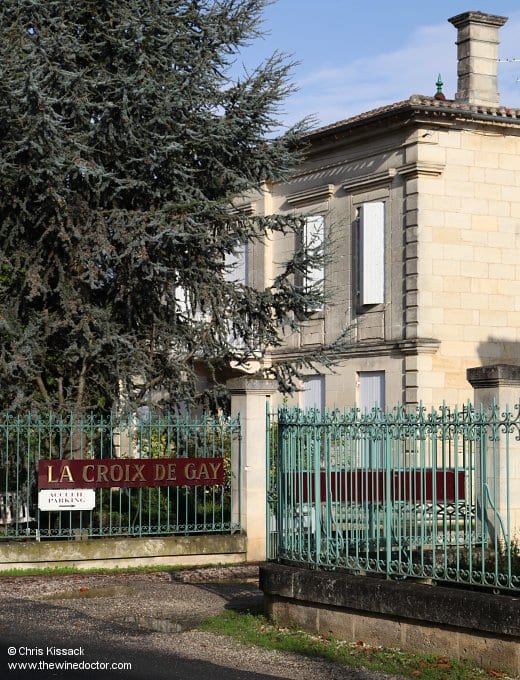 The story only really begins to firm up in the 19th century, by which time this corner of Pomerol is already settled and planted with vines. Clive Coates states that in the middle of this century the property is in the possession of Barthélemy Larroucaud (1825-1900). Barthélemy married a local girl named Madeleine Brieux, and together they had a daughter named Claire and a son named Pierre. Father and son Barthélemy and Pierre also crop up in my profile of Château L’Enclos, as son Pierre inherited that estate from his uncle, Jean Larroucaud, Barthélemy’s brother. Here, however, it is Claire that is of greater significance, although it was the family that she married into that is perhaps more noteworthy. The father-in-law is Bernard Angle, his surname a derivation of Anglais, perhaps suggesting the family had an English origin.