The story of Château La Marzelle begins back in the 12th century, with the Abbaye de Faize. Founded in 1137 by Cistercian monks who arrived here from the Abbaye de Cadouin, this ecclesiastical institution thrived for many centuries. It was the Cistercians who, being of need of wine, fostered the development of viticulture on several estates to the east, around St Emilion, including Château Faizeau in Montagne St Emilion. The land where Château La Marzelle stands today also once belonged to this order.

Sadly, as I have already described in my profile of Château Faizeau, the abbey and associated buildings were largely destroyed during the French Wars of Religion, as the 16th century drew to a close. The cloisters were rebuilt during the 17th century, but all that remains of the grand church next-door is the footprint of its foundations. Thankfully, Château La Marzelle is in somewhat better condition.

Although the monks planted and tended vines at Château Faizeau, the land at La Marzelle was not put to such a noble use. Indeed, it was not until the second half of the 18th century that the first vines were planted here, probably sometime around 1760. At this time. or perhaps even earlier, the estate had come into the hands of the Lamarzelle family, who appear in the records in St Emilion as jurats, and in Libourne as mayors, offices held during the 16th and 17th centuries. Even so, La Marzelle was not present on the Cassini maps of the 18th century, although it does appear on the Belleyme map which was published a little later, in 1821. 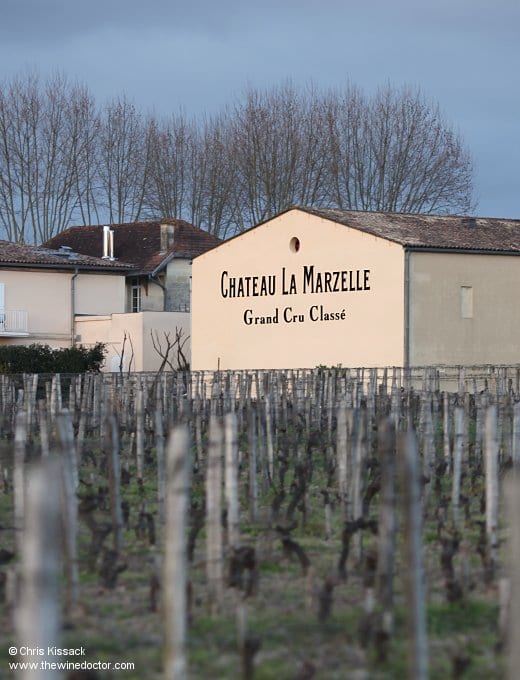 Finding evidence for the tenure of the Lamarzelle (or La Marzelle) family has turned out to be infuriatingly difficult. Writing in St Emilion (Jacques Legrand SA, 1988), Bernard Ginestet asserts that the Belliquet, Chauvin (presumably as in Château Chauvin) and Longa families held tenure here prior to the Revolution, whereas the modern-day proprietors ascribe ownership during this century to the Largeteau family. I have failed to find much evidence to support a role for any of these families as proprietors, except for Longa, and even this was a century later than Ginestet suggested. Tellingly, nobody mentioned the Lamarzelle family at all. As is often the case, the facts have dissolved as the years have passed.