So often when our thoughts turn to St Emilion it is the town itself we think of, its ancient walls of pale limestone and streets cobbled with dark Cornish granite, the latter stones once carried back to Bordeaux from England as ballast on ships relieved of their heavy cargo of wine. At the peripheries of the town these narrow streets begin to wind their way between the vines, the vineyards and town interdigitating with all the comfortable intimacy of old, timeworn lovers. If you were to journey further out into the vineyard it is most likely that you would strike out west, down the slope of the plateau, past Château Angélus (and numerous other famous names) until you reached Château Cheval Blanc, Château Figeac and then of course on to Pomerol.

Somewhat overlooked in comparison are the vineyards that lie in the opposite direction, on the same plateau as the town. Here in Saint-Christophe-des-Bardes, directly east of the town of St Emilion on the way out towards Castillon, lie some lesser-known gems and some historic estates. Writing in the 1868 edition of Cocks et Féret, the authors noted that the commune had been blessed with some particularly fine historic treasures, of which two were deemed worthy of special comment. One was the porch of the church in the centre of Saint-Christophe-des-Bardes itself, which dates to the 12th century. The other was Château Laroque, which (to some extent) dates to the same era. 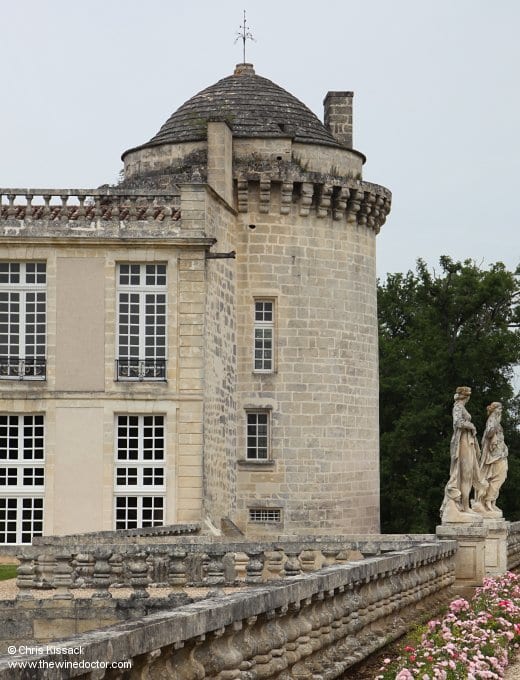 Sadly, most of the original château, that which was erected during the feudal era, has long since disappeared; there does still stand a very impressive 12th-century tower though, and it was this that caught the author’s eye. This visual appeal perhaps explains the decision to include a monochrome plate of the château (lifted from Les Richesses Gastronomiques de la France: Les Vins de Bordeaux, by Lorbac & Lallemand, published the same year). In truth much of the building pictured actually dates to the 17th century, but the 12th-century tower (pictured above) can still clearly be seen. In this profile I explore what is known about the history of this fine château, before looking at the viticulture and winemaking here.