I don’t recall which château it was I was looking for now. All I remember is that I had taken the road heading south and then south-west out of St Emilion. I had passed Château La Gaffelière, and after dog-legging right then left I had continued on over the D670. This arterial route runs in an almost perfectly straight line between Libourne to the north and St Pey d’Armens to the south. All day long it bustles which traffic, so much so that on occasion it can be a wait of several minutes before you can finally floor the accelerator and cross the flow.

At some point the soils changed; as I was coming down out of St Emilion it was clear they were already loose and sandy, but once across the D670 they appeared to take on a more homogenous character, with a rich, red-golden hue in places. I had descended from the exalted limestone plateau and slopes of the appellation to the sandy near-palus of St Sulpice de Faleyrens. A minute later, looming up in the distance, I espied the rather monolithic chai of Château Monbousquet. It is on a scale unexpected in this part of the appellation, which – in keeping with the concept that the largest profits go with the best terroir – is marked by low-key, more functional buildings, like that found at Château Val d’Or, in Vignonet, just a few kilometres to the south. This concept does not seem to hold true here at Monbousquet though, where everything, not just the chai but also the château which sits just a few hundred metres from the roadside cellars, has a sense of grandeur and scale. 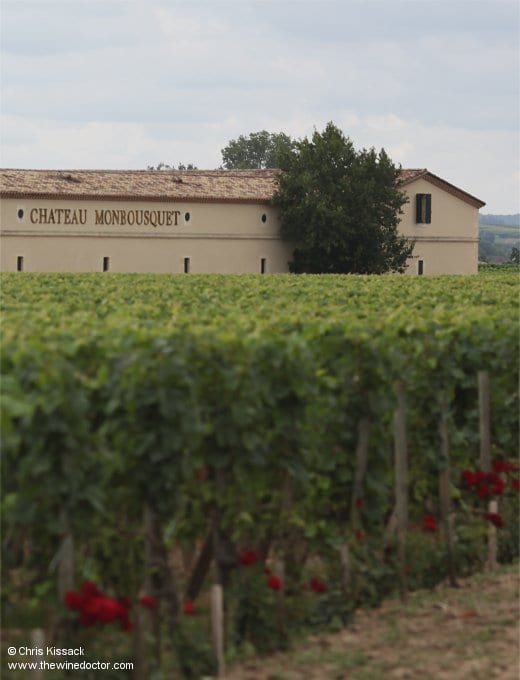 This grandeur no doubt suits its current inhabitant, Gérard Perse. A familiar name to anyone who knows St Emilion, Perse is of course the man behind the modern-day Château Pavie. Before we come to him in any detail though, a little history on the château is first required.