The story of Château Ripeau begins with the break up of the Corbin seigneurie, the history of which I have already told in as much detail as I can in my profile of Château Corbin. With the Revolution the seigneurie’s lands were confiscated as a bien national, a national asset confiscated from the nobility and the church for redistribution among the citizens of France. The estate was sold at auction to Jean-Mathias Auguste Chaperon (1753 – 1825), a négociant from Libourne. The Chaperon family was a very wealthy one, and Auguste (as he was known) purchased a large number of properties sold off as bien nationaux. In the Corbin secteur he built up a ‘super-domaine’, comprising 42 hectares of vines, land which would eventually give rise to what we know today as Château Corbin, Château La Dominique, Château Jean Faure and Château Ripeau, all of which can be found on the Belleyme map of the region, which dates to the late-18th century.

Of these estates both Château Corbin and Château Jean Faure both remained in the hands of the Chaperon family, having been passed from Auguste to a nephew, Jean Chaperon-Grangère (1773 – 1832), a négociant who was also mayor of Libourne. Tracing the path taken by Château Ripeau at this time has proven rather more challenging, but it seems the estate was now taken on by the Pailhas family. Victorin Pailhas (1803 – 1880) was later listed as the proprietor in the 1868 edition of Cocks et Féret. 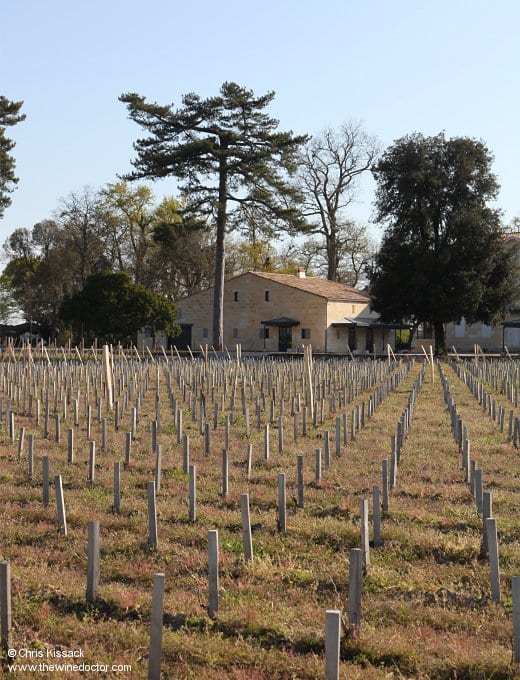 Upon the passing of Victorin Pailhas in 1880 the property was inherited by his Alfred Pailhas (1833 – 1879) and daughter Marie Alice Pailhas (1837 – 1907); they held onto the estate for a few years before they sold it to Denis Bühler (1811 – 1890) and Eugène Bühler (1822 – 1907), landscape-gardeners who had designed and built a park around the château in the typical 19th-century style for the Pailhas family a few years earlier, in 1874. They remained at the helm for a decade or two, their tenure noted in the 1883, 1886 and 1908 editions of Cocks et Féret, with an annual production of 30 tonneaux of wine, climbing to 40 tonneaux during this time. Thereafter they too sold the estate, sometime after 1908, the buyer one Raoul Gunsbourg (1860 – 1955), the director of the Opéra de Monte Carlo. He held onto the domaine for less than a decade, before selling it to the Loubat family, a well-known name in the region. The buyer was none other than Marcel Loubat.