The history of Château La Couspaude stretches back at least to the Middle Ages, when it was known as La Croix Paute, a reference to the cross (pictured below) that sits at the centre of the junction at one corner of the property. This cross once served as a meeting point for pilgrims making their way through St Emilion, as they headed towards Santiago de Compostela in order to pay homage to St James, who is said to be buried in the town’s cathedral. La Croix Paute seems like an obvious antecedent to La Couspaude, although the named has mutated somewhat over the years. For much of the 19th century the estate was known as Château La Gouspaude, before ultimately the modern spelling emerged.

Although this particular corner of St Emilion has a history that can be traced back to at least the 12th century, it seems sensible to begin the story of Château La Couspaude in the 18th century. It was at this time, in 1739 to be precise, that we have the first definitive evidence that there were vines planted at La Croix Paute, as described in documents associated with the sale of the property. 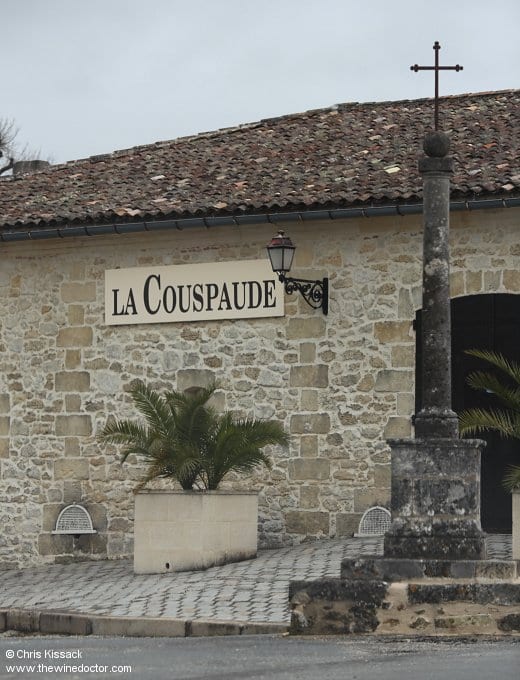 Sadly little is known about the estate’s fortunes during the 18th century, but we can assume the anonymous proprietors were doing rather well, as it was during this era that the château which stands today was built. By the 19th century the property was in the hands of the Chaperon family, as evidenced by documents pertaining to its sale. In the 1850 Cocks et Féret the property, now referred to La Gouspaude, was with the same family. The proprietor, a Monsieur H. Chaperon, was producing 12 tonneaux per annum from his vines.

The estate won a gold medal in an exposition universelle held in 1867, as did seemingly hundreds of other Bordeaux domaines, so it is perhaps not quite the achievement it might at first seem. The following year the estate popped up in the 1868 Cocks et Féret, now in the hands of an intriguing character named Commandant Adrien Lolliot. Production has slipped a little, now standing at 8 to 10 tonneaux, falling again under the Commandant’s direction to 6 tonneaux in 1874.