Seated in the front passenger seat next to Jean-Luc Thunevin, I enjoyed being able to survey the vineyards all around me – rather than having to watch the road – as we cut across the St Emilion vineyard. We had just spent a couple of hours together checking out a variety of terroirs in the eastern part of the appellation, obviously including the new Château Valandraud, but also going over the boundary into Castillon. Now, however, my stomach was telling me it was time for lunch, and I had a reservation in the centre of St Emilion, so we were heading in the right direction.

Cruising down the D243 I found my gaze ineluctably drawn towards the magnificent edifice of Château Soutard. In an appellation dominated by small farmhouses and understated and rather bijou châteaux perhaps more suited to the upwardly mobile merchant than the nobility, it is impossible not to notice this huge 18th-century château, built in the classical style during the reign of Louis XV (1710 – 1774), which sits in such a prominent position next to the road. Looking over to the vineyards, Jean-Luc made just one comment.

I knew I still had a lot to learn about Jean-Luc and his philosophies, but this one took me by surprise. The vineyards were sandy, but I had already realised Jean-Luc didn’t have a problem with sand, citing Château Rayas in Châteauneuf du Pape as one of the world’s great wines made from one of the world’s most sandy soils. With that in mind I resolved to learn more about terroir, about sandy soils (and other types too of course), and to learn more about Château Soutard. Although first, of course, I had that lunch appointment.

The history of Château Soutard can be traced back to 1513, when the estate was known as the Mayne de Soutard, although sadly there is no detail about what viticultural activity (if any) there may have been here at this time. Although most probably agricultural, it is almost certain that there were no vines here at this early stage. Later records from 1620 indicated that the Bourdieu de Soutard was in the possession of Élie Gréau, a notable figure described by Joseph Guadet in Saint-Emilion, son histoire et ses monuments (Imprimerie Royale, 1841) as an “avocat, lieutenant assesseur civil et criminel, et commissaire examinateur de la ville et jurisdiction” which all sounds fairly impressive. A bourdieu, however, was an old Gascon word for a domaine around a windmill or farm, which supports my thoughts that this was an agricultural domaine. 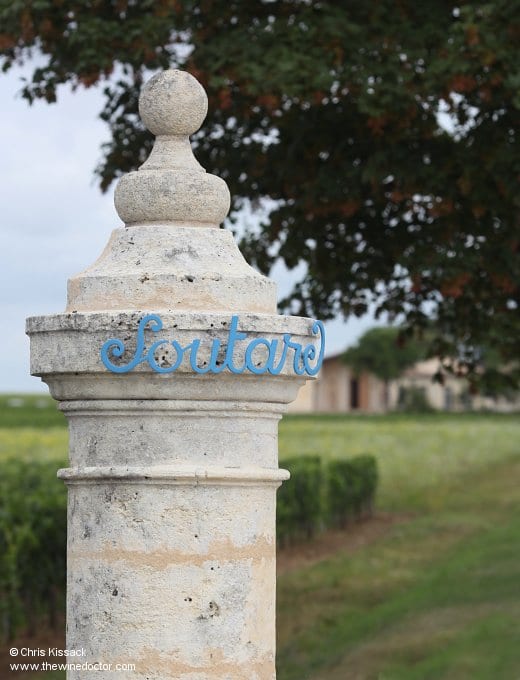 During the years that followed there were several families with a stake in the Bourdieu de Soutard including, by 1670, Élie Desèze and the Hostain family. In 1675 records indicate that Pierre Desèze, who was Élie’s brother and the husband of Perrine Gréau, presumably a descendent of Élie Gréau, also had a presence here. Records indicate that he and Perrine sold 1 hectare of land, including some vines, to Pierre’s sister and her husband, the first solid evidence of viticulture on the estate.