I remember the first time I chanced upon Château de Ferrand. Following my nose through the vineyards to the east of St Emilion, I turned up by Château Lassègue and followed a narrow path which ascended the côtes, taking me up onto the plateau above. This is one of a number of the roads which will transport you from the vineyards of the valley floor to the more prestigious plantings of the plateau, most of which make the climb within one of the numerous small valleys which slice into the slope like scars, which makes the ascent a little more gentle.

This road was different though; suddenly the vineyards disappeared and I was driving through dense woodland. The road, which slalomed back and forth up the slope like a Alpine mountain pass, was strewn with the leafy detritus of autumn. After taking the fourth corner the route eventually started to straighten out a little, even while it continued to climb, and before long I had emerged once more into the bright October sunshine. All around me, the plateau was planted with the vines of Château de Ferrand. The attractive château sits at the roadside, a little further on, just past the Église Saint-Hippolyte, in a prime position which affords fabulous views across the valley of the Dordogne.

This view, rather than any great potential in the vineyard, was perhaps what prompted the noble proprietors to build this château. The domaine may well have even more ancient origins, but the first hard evidence relating to its existence dates to the 17th century. The landowners at this time were the noble Bétoulaud family, the key figure being Gabriel de Bétoulaud (1616 – 1650), a conseiller in the Bordeaux parliament. He was the son of Marie de Bétoulaud née Bouquey, Dame de Saint-Poly, who had married Gabriel de Bétoulaud. 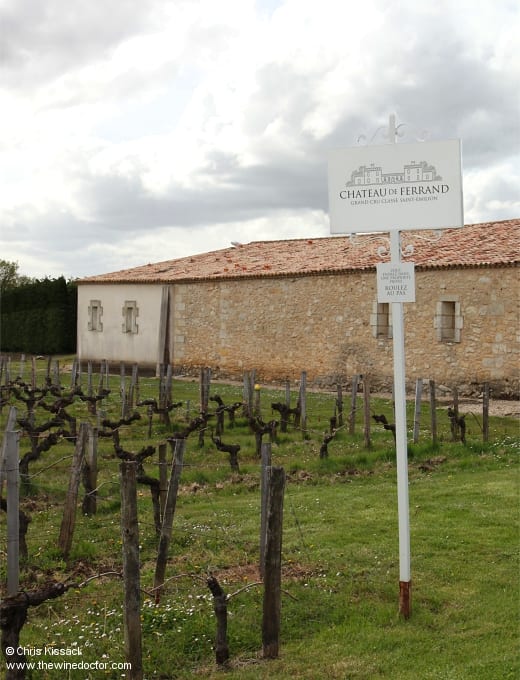 On February 24th 1636 this younger Gabriel married Jeanne de Forquier and they had two sons, named Élie de Bétoulaud (1638 – 1709) and yet another Gabriel de Bétoulaud (Gabriel was the name to have in this family, it seems). Elie is of particular significance to the story of the estate as it was he who had the château built, the design reputedly inspired by that of Le Grand Trianon, an imposing edifice within the royal estate of Versailles commissioned by Louis XIV (1638 – 1715) and built by his architect Jules Hardouin-Mansart in 1687. The building at Ferrand was graced with a large park and its position up on the plateau also permitted the excavation of handsome cellars, dug deep into the limestone rock.