The story of St Emilion is rich in châteaux which seem to have sprung from nowhere, although of course no domaine is really created from nothing; most often the sudden rise in quality and renown reflects the arrival of a new proprietor, one prepared to invest at the level necessary to push the domaine in question into the limelight. Alternatively, some famous names are born with the cleaving of an already large estate in two, or with a section of vineyard being committed to the production of a new cuvée, one intended to outshine the domaine’s original wine. In the case of Château Faugères, all of these possible events are relevant to its creation.

It is not that long since I first tasted the wines of Château Faugères, a few years after it came into the hands of the current proprietor, Silvio Denz. Alongside the wine came two others, named Château Péby Faugères and Château Cap de Faugères; the three wines and three estate have an intertwined and potentially confusing history, having all – as I have already alluded above – originated from the one estate. Today, although all three are under the same ownership and management, I feel that they should be considered as three separate entities. Here in this profile I unravel their stories, before going on to look specifically at the vineyards and winemaking at Château Faugères. I will deal with Château Péby Faugères and Château Cap de Faugères in their own respective profiles.

The story of Château Faugères begins with the hamlet of Faugères, which has been here since at least the 16th century. The original Faugères château (pictured below, nestled among the trees) is not quite so old, as it dates to the 18th century, and there does not seem to be any certainty about who owned the land at this time, or who ordered its construction. What is known is that in 1823 Château Faugères came into the ownership of the Esquissaud family. It was most probably François Esquissaud who acquired the land; he already owned land in Sainte-Terre, which borders the Dordogne upstream of Vignonet. With his acquisition of the estate there began an association between Faugères and the Esquissaud family which would last for more than 150 years. 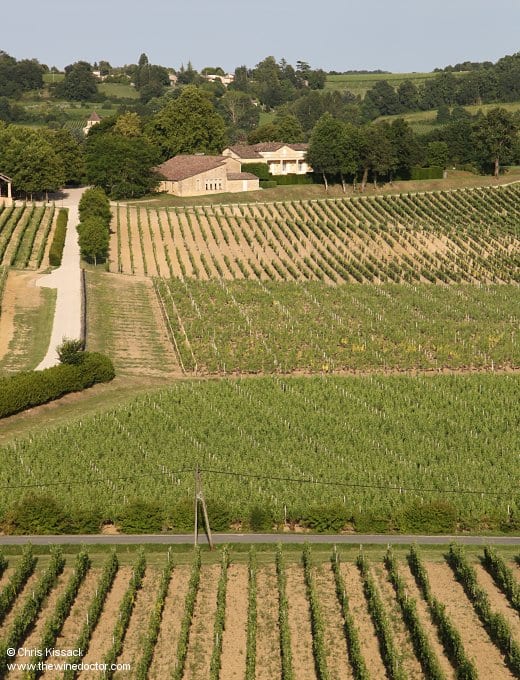 From François the domaine then passed into the hands of Jean Esquissaud (born 1816). Jean was a merchant who was in the business of making and selling fishing nets, a reflection of the proximity of the Dordogne to his home in Vignonet. But he was also a négociant, wine clearly another important source of income for him. In 1837 he married Catherine Musset, and they had two children, François Esquissaud (1838-1902), who also went by the name of Alfred, and a daughter Françoise Isaure Esquissaud (1839-1846).