Couvent des Jacobins owes its existence, as its name suggests, to the Jacobins, a religious order created during the 13th century. They were more widely known as the Dominicans, named for Saint Dominic de Guzman, the founder of the order. In France, however, they were often referred to as the Jacobins, simply because their convent in Paris was attached to the Église Saint-Jacques. The order had a very strong presence in St Emilion though, as the remains of the Dominican convent (pictured below) in St Emilion attests.

During the 14th century a group of Jacobin monks living outside the town of St Emilion were subject to harassment first by Raoul I (died 1345), Comte d’Eu and Comte de Guisnes, and later by Jehan de Neuville, Seigneur de Neuville, who was the lieutenant-général in Guyenne for Richard II (1367 – 1400), also known as Richard of Bordeaux. The religious ascetics were saved in by John of Gaunt (1340 – 1399), the Duke of Lancaster and one of five sons born to King Edward III (1312 – 1377) of England, who offered them land and protection within the town walls. Like Jehan before him, John of Gaunt held the office of lieutenant-général in Guyenne, the region being an English possession, although he obviously looked upon the monks with a kinder eye. The gift of land was confirmed by his father and plans for their construction of a monastery received papal approval from Boniface IX (1355 – 1404). It was completed in 1402, and the Couvent des Jacobins was born. 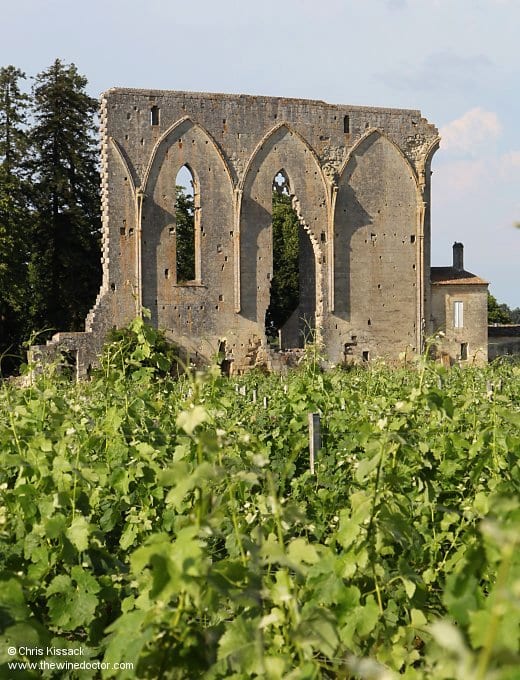 The story of the Couvent des Jacobins for the next few centuries was, presumably, a peaceful one. The monks continued to reside here up until the decade that preceded the French Revolution, and of course for much of this time the monks tended to vines in the surrounding vineyards. It all began to unravel during the closing years of the 18th century, when the institution was dissolved. The Jacobins left the town in 1780, leaving behind their property, complete with cellars, bakery and traditional cloisters, not to mention 2.6 hectares of vines in a number of locations around the town. Almost inevitably in 1791 the Revolution meant the estate was confiscated and sold off, at auction, as a bien national. The vineyard was broken up into parcels and divided between a number of buyers. It seems as though some of these vines may have been to the east of the town, in Aux Menuts, alongside those that belonged to the Cordeliers and which gave rise to the modern-day estates of Château Le Prieuré and Château La Clotte. Whatever their fate, none of these vines appear to be of relevance to the modern-day Couvent des Jacobins, which has been reborn and reshaped.