I’ve had Bordeaux on my mind this weekend. Mainly because, I suspect like many others with a foot in the wine world who had plans to go to Bordeaux for the primeurs in a few weeks time, I have spent the last couple of days rearranging my March/April schedule. Although the decision has been on the cards for a few weeks, the announcement by the Union des Grands Crus de Bordeaux on Friday that they would be postponing the primeurs tasting of the 2019 vintage, in light of the spread of COVID-19 throughout Europe, sparked a flurry of cancellations, the others coming from various subregional organisations and a handful of Bordeaux châteaux, all of which landed in my inbox on the same day.

It’s the right decision of course. Having said that, while the postponement of massive under-one-roof tastings such as ProWein was perhaps inevitable, organisationally the primeurs is very different. The largest tasting I frequent receives perhaps twenty visitors, all seated, while the rest of my time is spent on individualised one-one-one visits to the region’s top names. In terms of viral transmission, my primeurs is probably a low-risk activity. For some in the trade, however, attending much larger walk-round tastings, the risk is certainly higher, and of course there is the risk of spread associated with travelling too. Not to mention the fact that, with the second leg of my two-flight journey to Bordeaux having been cancelled last week, simply getting there was becoming increasingly convoluted. As I said, it’s the right decision. I applaud Ronan Laborde, president of the UGCB, for grasping this most problematic nettle (surely the last thing he imagined doing when he took office, just a year or two ago). 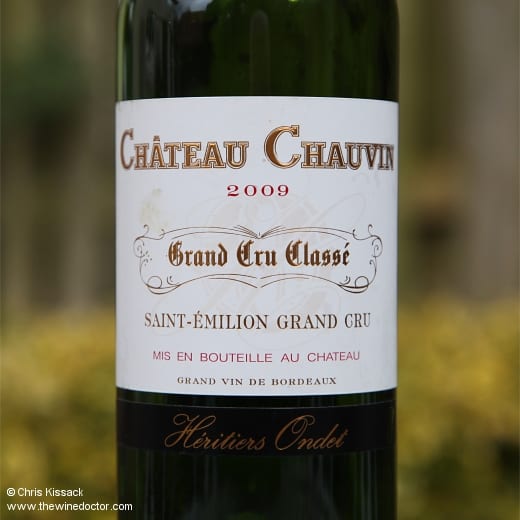 So, having cancelled sixty-plus appointments and tried to claim back what travel expenses I could (I won’t hold out much hope for some of these), I think I earned the right to pull the cork on a bottle. And why not one from Bordeaux? In recent years I have enjoyed a number of wines from the St Emilion vineyards on the limestone plateau to the east of the town, from the likes of Château de Pressac and Château Destieux, so this weekend’s wine provides something of a contrast. Château Chauvin lies to the west, closer to the border with Pomerol than it does to the town, the soils here usually featuring less of the limestone of the plateau, increasingly with a sandy or gravelly character. Château Chauvin has a mix of sand and clay, and the results often exceed what I would expect from the terroir. Of course this corner of the appellation has a track record for this; a short walk to the south lies Château Rol Valentin.

This bottle was to hand because I had originally earmarked it for last year’s Bordeaux 2009 tasting, but in the bedlam of my site redesign and upgrade some wines slipped under my radar, including this one. Never mind; 2019’s loss was this weekend’s gain. The 2009 from Château Chauvin displays a very dark and richly pigmented core with a claretty rim in the glass. Aromatically it opens with smoked berry fruits, with degraded dark cherry, sweet blackberry and juniper berry, roasted and dusted with cloves, cinnamon, leather and tobacco leaf. It seems to be evolving very nicely, but it is still overtly rich and clearly brimming with primary fruit potential. It is full, sweet and textured on the palate, with a supple and seamless substance, polished and velvety, all wrapped in the well-knit tannins that define the vintage, here with a rich and chocolatey vein. The acidity is on the soft side, as we might expect, which lends the wine a bold, broad and creamed substance, and it is the backbone of tannin which provides the structure, right through to the finish, which is swirled with spiced and roasted fruit and ripe, lingering tannin. Fine for drinking now, but there is no rush here; despite what some say about the 2009 vintage, this is still on the way up. 94/100 (16/3/20)