It is easy to perceive that this domaine has a long history; one merely has to walk across the hillside of La Madeleine, through the vineyards of Château Ausone, Château Bélair-Monange and of course their neighbour Clos La Madeleine to see these lands have been cultivated for centuries. Vineyards are cut into the limestone of the hill, their boundaries defined by ancient walls, and behind them age-old cellars are cut into the bedrock. So it is no surprise to learn that this domaine dates back many centuries. The earliest known proprietors were the Chatonnet family, who have been tending vines in this corner of Bordeaux for at least five hundred years. The earliest mention of Clos La Madeleine dates to the middle of the 18th century, as evidenced by documents held by the courtier Beylot who purchased wine here in 1770.

The négociant Lecoutre de Beauvais, who was also editor of Le Producteur, a journal published monthly between January 1838 and December 1841, tells us that in 1841 the estate was in the hands of the Chatonnet-Crépin family. A few years later the first edition of Cocks et Féret was published, and there were listed three vignerons working the land at La Magdelaine. These included two members of the Chatonnet family, turning out 12 and 5 tonneaux each per annum (48 and 20 barrels per annum respectively), and a widow named Bon whose output amounted to 10 tonneaux (40 barrels) per annum. 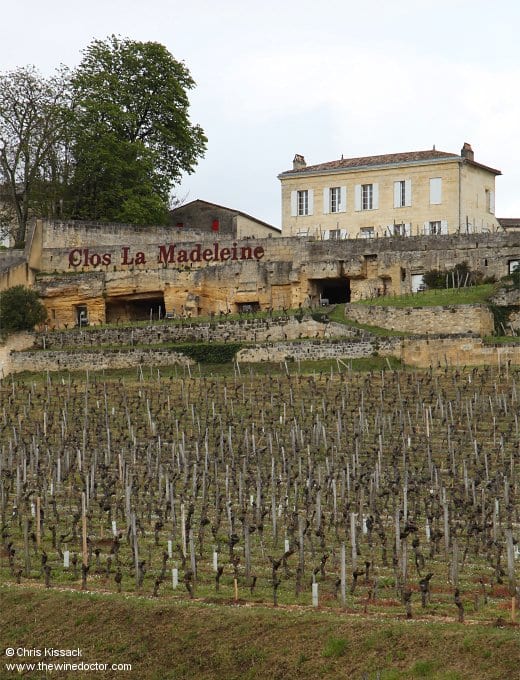 By the time the 1868 Cocks et Féret was published there were four proprietors working the land at La Madeleine (which seems to have undergone a slight change in name around this time, from Magdelaine to Madeleine). Chatonnet remained in the lead with a production of 10 to 15 tonneaux per annum, the others being Chatonnet-Crépin, Bon Barat and Jean Domecq-Cazeaux, each of whom were turning out 3 to 4 tonneaux per annum. The larger Chatonnet vineyard was the origin of Château Magdelaine, while the Bon Barat vines would one day become Curé-Bon la Madeleine. The vines which interest us here are those in the smaller Chatonnet-Crépin vineyard, because these were the vines that are today part of Clos La Madeleine.