The development of Bordeaux as a white wine region – beyond good old Pessac-Léognan of course – continues unabated. From the great gravel mountains of the left bank (I acccept that ‘mountains’ might be pushing it a bit – can we write it off as poetic licence?) to the craggy slopes of limestone and clay on the right bank, many famous châteaux have joined their peers in planting white vines. The results can be excellent, and often come from those who look outside the region for their inspiration, whether it be sourcing new Sauvignon Blanc vines from the best growers in Sancerre, as the Guinaudeau family did at Château Grand Village, or planting varieties entirely new to the region like Frédéric and Hélène Soual did at Château du Retout, the cultivars they chose more commonly associated with the Jura and Jurançon than with Bordeaux.

In Sauternes the situation is a little different, the choice usually being which rows or parcels of Semillon and Sauvignon Blanc to turn over to making a dry white, rather than worrying about which varieties to plant, and where. Even so, when Bérénice Lurton finally decided to realise a long-held ambition to produce a dry white wine from her vineyard at Château Climens, it was still the Loire Valley that provided the inspiration, in the shape of Pascal Jolivet. It was a meeting with Pascal which gave Bérénice the stimulus she needed to get the Asphodèle project underway; it also brought plenty of practical advice, as Pascal immediately came on board as a consultant to the project. This was back in 2017, just after spring frosts had inflicted heavy damage on the vineyard, so much so that Bérénice did not produce any grand vin that year; what she picked she sold off, not being content with its quality. 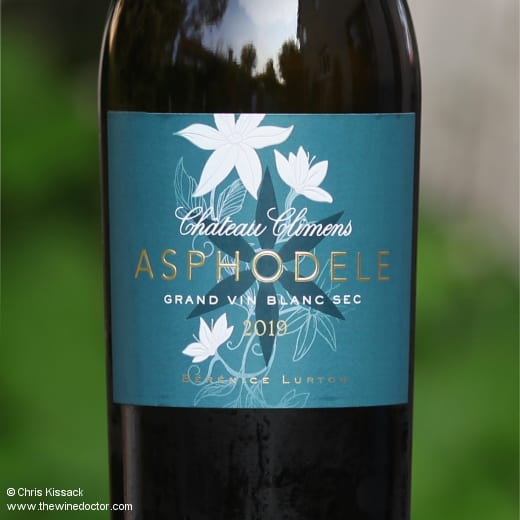 The vines for this cuvée are manged in an entirely biodynamic manner, as per the rest of the Château Climens vineyard. It takes fruit from the youngest vines, planted between 1997 and 2012, and as a clear reflection of the region the blend is entirely Semillon. The fruit is picked by hand, fermented in stainless steel cuve and then aged in the same, with no contact with oak at any time. The first vintage to be released was 2018, and we should see a 2020 as well, maybe this time next year. Sadly one vintage we are destined not to be taste in the future is 2021; like 2017, another devastating frost took out the developing buds, and Bérénice already knows she will not be making a grand vin, and presumably Asphodèle too, this year.

But back now to the current vintage of interest, and the 2019 Asphodèle, the second vintage of this new cuvée from Château Climens. A pale straw-coloured hue in the glass, it has a nose which feels taut, rich in citrus notes, lime and orange pith especially, but there are also richer tones of cherimoya and creamed white peach, threaded with chalk dust and white pepper. Just as interesting are all the aromas I dont find, like lemon peel, chamomile and mint, so common in young Bordeaux but which of course reflect the presence of Sauvignon Blanc, whereas this cuvée is pure Semillon. The palate impresses with a little Polish to the texture at the very start, bringing with it a phenolic drive and fresh acidity, all of which is maintained through the midpalate as balance and drive. Towards the finish it takes on a little waxy note as well, a contrast against the increasingly crystalline fruit, and combined with a touch of bitterness it adds something delightfully intriguing to the whole. Cool and driven, overall this is fine for drinking now, but I imagine in five years time it will be a much greater experience. If you can resist the temptation to pull the cork now, that is. 94/100 (19/7/21)