Château Lamothe looks down upon the nearby road from their position on a gently sloping plateau just outside the village of Sauternes. Indeed, it is easily visible in the distance as soon as you emerge from the village, the château a broad and low-slung building dating from the 16th century, with prominent rounded towers at each corner wearing rather Romanesque roofs. I often think its whitewashed walls and towers to be somehow incongruous, as if this castillo blanco has been transplanted here from somewhere further south. La Mancha, perhaps?

But this is certainly not the case; Lamothe, which is half of this gleaming white pseudo-fortress, is very much part of France, and part of Sauternes. The other half is its conjoined twin, known today as Lamothe-Guignard (having been previously named Lamothe-Bergey after another owner). The split which resulted in the original Lamothe estate (which was also referred to as Lamothe-d’Assault when it was whole) being divided into these two separate and independently owned properties occurred during the 19th century. Before this time little information on the estate’s history is available, but that is where we start.

The Origins of Lamothe

The origins of Château Lamothe are, as you would probably imagine, intimately intertwined with that of Lamothe-Guignard. Indeed, the two have a shared history right up until the 19th century. In the very beginning the land was occupied by a Mérovingien fortress probably constructed during the 8th century, built on this crop of high land to protect the locals from troublesome outlaws who inhabited the nearby woods and who had a tendency to raid the properties of the nearby inhabitants. Evidence that this fort existed can still be seen today, although now little more than a tree-covered mound of earth remains, a structure often referred to as a motte (as in ‘motte and bailey’ castle), a term which seems most appropriate in view of our subject matter. The motte lies directly behind the modern-day château of Lamothe. 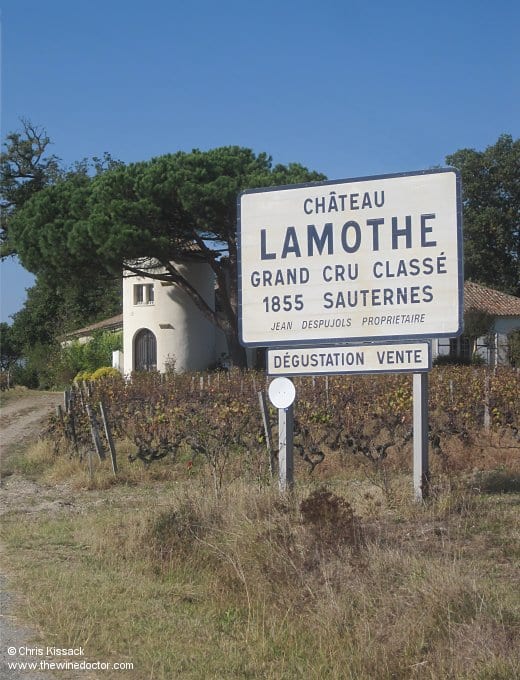 The story of Lamothe during the ensuing centuries is, however, decidedly sketchy. The fortress was useful in the defence of the land against the Normans during the 9th century, and it served as a military stronghold during the Hundred Years’ War, when the estate was owned by the most noble families of Fargues and Budos. At some point during the 16th century the building that still stands today was erected, taking the place of the ancient fortress. And by the early years of the 19th century the estate was in the hands of Jean-François de Borie, who in 1814 sold the buildings and vineyards to an English négociant named Dowling. His tenure does not appear to have been hugely successful, however, and six years later the property came to a family named Baptiste. And this is when the modern story of Château Lamothe really begins.