In many classified appellations – perhaps in every such appellation – there are properties which, for a variety of valid and sometimes not so valid reasons, seem to have slipped the net and avoided joining the list with their peers. If we are to search the classification of Sauternes and Barsac, which was drawn up alongside the 1855 classification of the Médoc, it is perhaps Château de Fargues that is the most prominent example of this phenomenon. Despite the grandeur of the estate, the long associated with the Lur Saluces family (of Château d’Yquem, where else?) and the high price of the wines, this is one of a number of unclassified estates within the Sauternes appellation which – alongside the likes of Gilette and Raymond-Lafon – it is essential that we are aware of.

As is the case with a number of Sauternes estates Château de Fargues possesses some ancient history, and an inspection of the property today is testament to this. It has a dilapidated air, the thick walls and the rough stone material modified only by the occasional scrape of more recent mortar, and the presence of modern scaffolding. If you were expecting a Renaissance château akin to those of the Médoc, further north, you will de disappointed; this ancient building, pictured below, bears more resemblance to a ruined castle, as indeed it should. The first foundations were laid in 1306, on the order of Raymond Guilheim de Fargues. Newly ordained as cardinal by his uncle Bertrand de Goth, otherwise known as Pope Clément V (and obviously best associated with Pape-Clément), Raymond wished to erect a fortress in keeping with his new status, and 700 years later it still stands, in part at least, testimony to its solid construction. 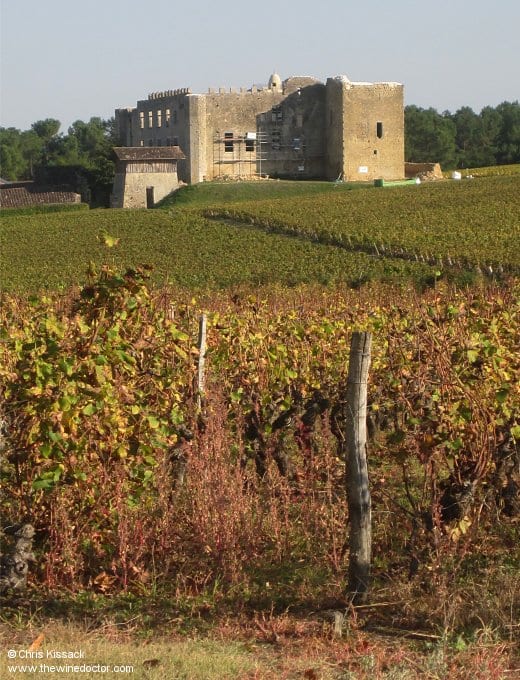 With the passing of time the stronghold changed hands several times, first coming to the La Mothe family and then to Gaston de Foix, a French nobleman who came from a powerful lineage that included cardinals, viceroys and princes. From them it passed to the Monferrands, and was bequeathed to Isabeau de Monferrand by her father following his death at Castillon in 1453. She married Pierre de Lur in 1472, and together they and their issue resided at the property for more than two centuries. In 1586 Jean II de Lur, a descendent of Pierre and Isabeau, married Catherine-Charlotte de Saluces, and it is from these two that the Lur-Saluces family of today originated. Their great-grandson Eutrope Alexandre, however, was in 1672 the last of the line to be born at Château de Fargues, for in May 1687 the property was irrevocably damaged by fire, and it has since stood as little more than a ruin for three centuries. It is a cared-for ruin though, as the picture above illustrates, the presence of scaffolding indicating some ongoing repair and restoration in order to safeguard what remains for the future. Nevertheless, today the property remains – uninhabited, admittedly – in the ownership of the modern day descendents of this Lur-Saluces union.