The history of Château Sigalas-Rabaud may be traced as far back as 1660, when the estate was under the ownership of the de Cazeau family, who held tenure here for over 150 years before the property was sold. From then onwards, the Sigalas-Rabaud story has been one of division, reunion, expansion and division once again, eventually giving rise to the property that we know today as Sigalas-Rabaud. Division led to the birth of Château Rabaud-Promis, which lies adjacent to Sigalas-Rabaud atop a small rise in the Sauternes landscape, just around the corner from Lafaurie-Peyraguey. I can’t help feeling, on looking at the two properties, that Rabaud-Promis came off slightly better in terms of the grandeur of its château but, as we all know, its the quality of the soils, the skill of the vineyard manager and the technical director, and of course the ultimate quality of the wine that really matters. And as far as quality goes, in recent years Sigalas-Rabaud has certainly been in the ascendant.

The Rabaud and Sigalas Families

Château Rabaud began life with the Rabeau family, but when Madame Peyronne de Rabeau married Antoine de Cazeau in 1660 the estate came to him as part of her dowry. The de Cazeau family, of noble descent, ran the vineyards without any significant event until 1819, when Pierre-Hubert de Cazeau, mayor of Bommes, sold it all to Gabriel Deyne (alternative spellings, including Deyme and Deymes, exist). Deyne obviously maintained the quality of the wine, as under his tenure the property was included as a premier cru estate in the 1855 classification of Sauternes, albeit under the name of Rabeaud (the name has clearly evolved as the centuries have passed). 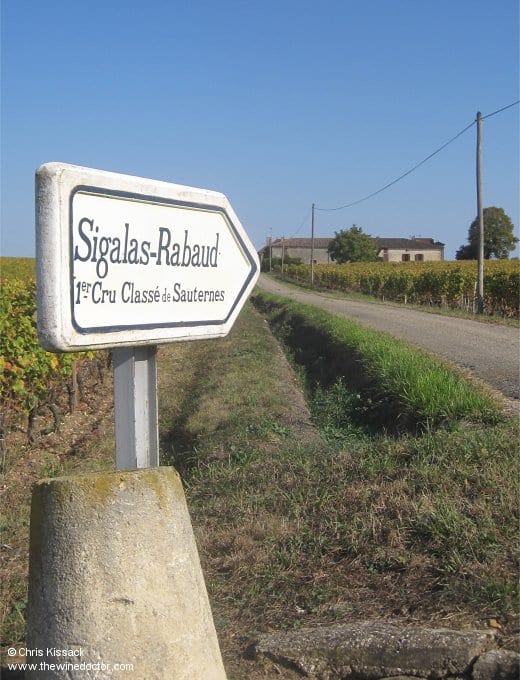 The first Sigalas comes into the story in 1863, when Deyne sold the estate, now amounting to about 50 hectares, to Henri Drouilhet de Sigalas. From this point on the name appeared on the label, although as Château Rabaud de Sigalas, of Bommes (remember, this is before the appellation contrôlée system was introduced in the 20th century), rather than Sigalas-Rabaud. During Henri ‘s tenure he also purchased Château Pexiotto, a 10-hectare property classed as a deuxième cru, and this new land was incorporated into the Rabaud holdings, Château Rabaud mystically retaining its premier cru status despite the absorption of these lesser vineyards.