If you ever find yourself knocking about the more south-westerly section of the commune of Barsac, keep an eye out for a curious sight. Bear in mind that you have perhaps just driven past Château Climens or Château Cantegril, both elegant and low-slung châteaux. And you may well have just been to Château Coutet, one of many imposing pseudo-fortresses which can be found here in Barsac and to the south in the other Sauternes communes. But scan the horizon and there, sitting upright and proud among the vineyards, in stark contrast to these other styles, you will see a three-storey château, with improbably pointy slate-tiled roofs and a gleaming white facade.

It is an unusual building; every time my gaze comes to rest on it I feel I may have woken up not in Barsac, but in Toytown; not because it is tiny (because it isn’t), but rather because it has such unusual proportions. Somehow, it just doesn’t look entirely real. For a start, it is one of only a few châteaux I have ever seen that is taller than it is wide. And, if you catch a view of it from side on and you will also see that there is very little depth to it; it is much wider than in is deep. It is almost as if it is part of a movie-set; it is convincing from the front but, when you move around the back, you half-expect to see it exists in only two dimensions, a plywood facade supported by wooden buttresses. In a final crisis of confidence, there hangs a large clock on the front of the château which would better suit the local railway station than a Bordeaux château. 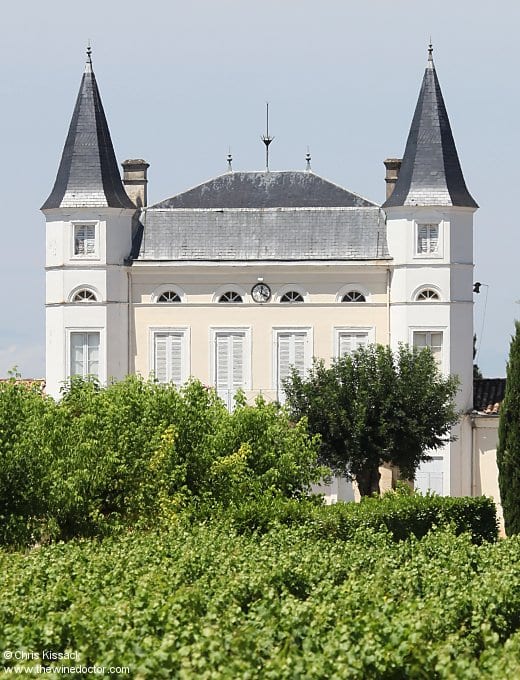 If you do catch sight of this building (and, as you might imagine from my description above, it is not that difficult to spot) then you have just located Château Caillou. It is not a movie-set at all, and we are a little way from the railway here; this is indeed a real 19th-century château, albeit one with very unusual proportions. And there is a vineyard too, this château being one of the lesser-known deuxièmes crus classified in the 1855 classification of Sauternes and Barsac.