The history of Château Coutet dates back to the 13th century, hundreds of years before anyone even dreamt of planting vines on the then-marshy, now-prosperous Médoc. Some parts of the château date from that period, as is obvious from even the briefest examination of the property; these parts have thick walls of stone, towers and defensive castellations. Out among the northern plots of the vineyard sits a dovecot which towers above the vines (pictured below), also obviously ancient, dating from the same era. There has, however, been extensive augmentation and modification to the château over the ensuing centuries, including a 14th-century chapel, two 16th-century towers and a remodelling in the 18th century.

The most recent additions to the château have a somewhat finer appearance than the early parts, with shuttered windows, tiled roofs and witch’s hat turrets atop the 18th-century towers. Thus the château at Coutet is a dramatic blend of the ancient with the modern. In a way this is makes a good analogy for the family that run the estate and the wine that they make; there is no shortage of awareness of the heritage of the estate and its place within the Sauternes firmament, but add in a bright new generation in the shape of Aline Baly, currently taking the helm, and this estate is certainly one that is looking forward rather than back. 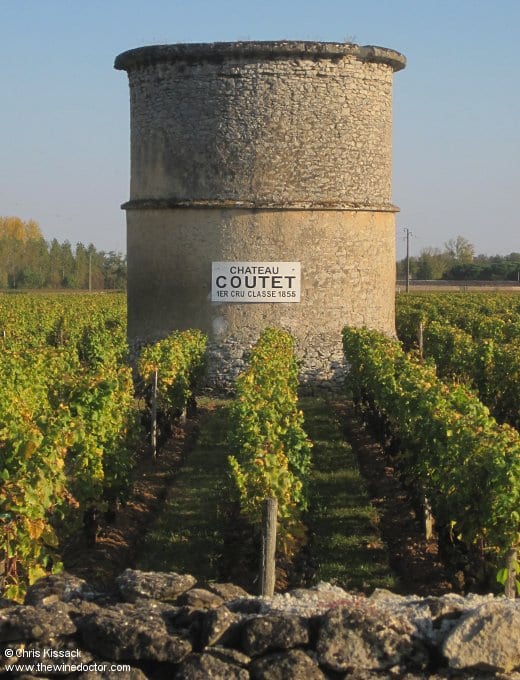 Although those very early buildings still stand today, an integral part of the château at Coutet, little is known about the ownership of the estate during the first few centuries of its existence. Even the derivation of the name is obscure; it is possible that it relates to one of the original proprietors, although there is a suggestion that it is derived from a Gascon word for knife, reflecting the refreshing cut of the palate I suppose. The earliest records that exist take us to 1643, and indicate that the estate was purchased by local politician Charles de Guerin, and from him it passed to Jean de Pichard in 1695, and then in 1788 onto Gabriel-Barthélémy-Romain de Filhot, who also owned Doisy-Daëne and, of course, Château Filhot (which explains the striking resemblance between the Coutet and Filhot labels). I hope he made the most of his time at Coutet, because by 1794 he found himself at the wrong end of the guillotine, as did his wife, Thérèse Filhot Chimbaud. The Filhot estate, which included Coutet, was presumably divided up and auctioned off, as was the customary practice with confiscated property. Nevertheless, the Filhot name remained intimately associated with the estate, and within a few years it was back in their hands. Marie-Geneviève de Filhot, the orphaned daughter of Gabriel-Barthélémy-Romain and Thérèse, married Antoine-Marie de Lur-Saluces of Château d’Yquem, and by 1810 the political scene was sufficiently different for her to take possession of Château Coutet once again. Together she and Antoine-Marie owned not only Yquem and Coutet, but also Fargues, de Malle and nearby Château Piada.