The accepted wisdom is that Château La Clotte-Cazalis has been in the hands of the Lacoste family since 1779, although I have managed to uncover little supporting evidence for this, and what I have found relates more to the 20th century. There is no denying the lengthy presence of the Lacoste family in the region though, this being a name long associated with the region, châteaux and wines of Barsac. Château Climens itself was once in the possession of this family, and if you trace the Lacoste family tree through the ages you will find it intertwines with numerous other locally well-known names, in particular Dubourdieu.

The long association between this estate and the Lacoste family begs at least one question though; if this has been a Lacoste possession since the beginning of wine history (or thereabouts), where did the name La Clotte-Cazalis originate? To me it seems likely that Cazalis is the name of a long-forgotten proprietor, as this is another relatively common name in the region. Perhaps a Cazalis worked the land here before even the Lacoste ancestor came along? As for La Clotte, this is the name of the lieu-dit, and of course it is not unfeasible that it is derived from Lacoste. 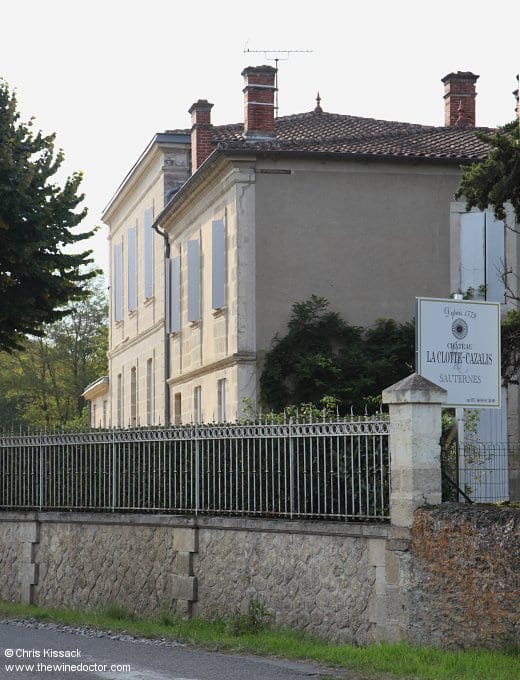 There is no certain record of the estate in the usual 19th-century references, although there are some tantalising clues. Writing in Traité sur les vins du Médoc (second edition, Chaumas, 1845), Wilhelm Franck notes the presence in Barsac of one Gabriel Cazalis, who is turning out a rather modest 10 tonneaux per annum. He also informs us as to the work of a Veuve Lacoste, producing a more impressive 18 to 20 tonneaux per annum, and the Lacoste frères, who seem to have the largest domaine, with a production of 30 to 35 tonneaux per annum. It is possible that some of these individuals and their vines played some role in the early years of Château La Clotte-Cazalis.