One of the most famous appellations in all France, it is no coincidence that it was the wines of Sancerre that first enticed me to explore the Loire Valley and its many vineyards in more detail. While committed fans of the region and its wines will argue the merits of other Ligérian heavyweights such as Chinon or Vouvray, in terms of international fame I think perhaps only Muscadet can really square up to Sancerre. But of course Muscadet’s fame has faltered and fractured over the years, and it has required a degree of rebuilding and repair. Sancerre, though, remains an appellation permanently on the up, and it is as successful today (or perhaps even more so) than it was ten, twenty or thirty years ago.

Sancerre’s significance, both emblematically and economically, should thus not be underestimated. Its wines enjoy a global reputation, and they provide the world of wine with a benchmark style for Sauvignon Blanc. Many have set out to imitate it, but few have come anywhere close. Today the world is full of attractive wines made using this variety, but few possess the floral aromatics, minerally drive and acid tension that can be found in a glass of white Sancerre from one of the region’s leading vignerons, and as a consequence its pre-eminent position as a reference point for this variety remains secure.

Approaching Sancerre from the southwest, after a long drive up from the vineyards of Vouvray, you perhaps gain some sense of the town’s significance. The road cuts clean and straight through the French countryside, cleaving the expanse of wheat and woodland into two. After two quick bends you will find yourself on a long avenue lined with trees, and suddenly the landscape is now blanketed with emerald-green vines. This leafy avenue stretches on through open vineyard for two kilometres, like a Neolithic cursus heading for some ancient and revered monolithic henge. But the destination here is not quite so old, and halfway along the avenue it comes into view, the rooftops of Sancerre sitting proud atop a distant summit, a rocky mound thrust upwards by a buckled faultline.

The town, while commanding, is less visually impressive than it once was. Although today it is open and welcoming, up until the early-17th century it was a fortified town, as pictured below in the print by the military architect Claude Chastillon (c.1559 – 1616), its narrow streets and tunnelled cellars surrounded by huge defensive walls and six great stone towers which rose high above the surrounding countryside. Sancerre has undoubted significance for wine drinkers, but its hilltop position, near the centre of France, meant that for many centuries it was also a town of great strategic significance. Today, however, only one such tower still stands, on the eastern edge of the hill, the iconic Tour des Fiefs. In order to prevent a repeat of the eight-month siege which took place here during the Wars of Religion the other towers were all destroyed, in 1621, leaving a rather less dramatic skyline (pictured further below, in July 2017). The town does still boast some impressive ramparts though, and a walk along the walls affords superb panoramic views over the rooftops of neighbouring Saint-Satur, across the broad valley of the meandering Loire and over the vineyards of Sancerre. 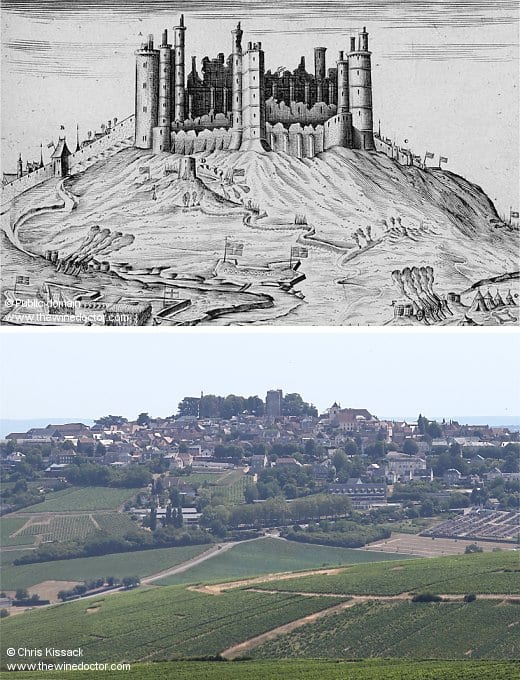 It is these vineyards, and the wines they give us, which I will explore in this instalment of this guide. I will not, however, pretend that I can deal with all this appellation has to offer in one page. So here I will look solely at the history of Sancerre (I promise to stick to wine, and to not be distracted by the Wars of Religion too much, even if they forever changed the face of Sancerre). On the next page I will provide an overview of the modern-day appellation, and some opinions on its wines, not only white (a style already mentioned) but also rosé and red (which should increasingly not be overlooked). Some corners of the appellation deserve more detailed examination though, and while I will not profile every village and vineyard individually, I will put three of the appellation’s most enticing destinations – Chavignol, Bué and the town and slopes of Sancerre itself – under the spotlight.

So let’s begin with some Sancerre history, starting with two early figures who can tell us something about the origins and history of Sancerre’s vineyards, Gregoire de Tours and Rodulfus Tortarius.