There are few châteaux lying outside the two tiers of the 1855 classification of Sauternes and Barsac (three tiers, I suppose, as we should not forget the exalted premier grand cru classé position enjoyed by Château d’Yquem) which attract much attention. This is perhaps not surprising; in a region where the wines are still disregarded by many for being unfashionably sweet, prices have long remained favourable to the discerning Bordeaux drinker. As a consequence there simply isn’t the same need to hunt out alternative good-value châteaux beyond the realms of the grand cru classé châteaux as there is in, for example, Pauillac or St Julien.

Nevertheless, there are some unclassified châteaux, perhaps more than you might imagine, which are worth knowing about. One of the few unclassified estates that should be regarded in this manner is Château Bastor-Lamontagne, an estate with which I have been familiar ever since my first taste of the fresh, blood-orange tones of the 1986 vintage. Since then I have on occasion noticed this fresh, flavoursome, citrus fruit trait in a number of other vintages, not least the 2003 and 2004. Often lighter and brighter than their more highly-ranked peers, the wines of Château Bastor-Lamontagne have a character that will appeal to many looking for a less turbo-charged style of Sauternes. Classified or not, this is a property with which we should at least be familiar.

The Bastor-Lamontagne story begins, as far as we are concerned, in the early 18th century, when it was in the possession of the French crown. In July 1711 the Bastore estate, as it appears to have been called (Bastore was perhaps the name of an earlier proprietor), was bestowed upon a Bordeaux parliamentarian named Vincent de la Montaigne (which accounts for the suffix Lamontagne). On maps drawn up later that century by Belleyme the estate is shown to have a vineyard, clearly indicating that there was already active viticulture here at the time, although the vine was possibly just one of many crops that were planted. 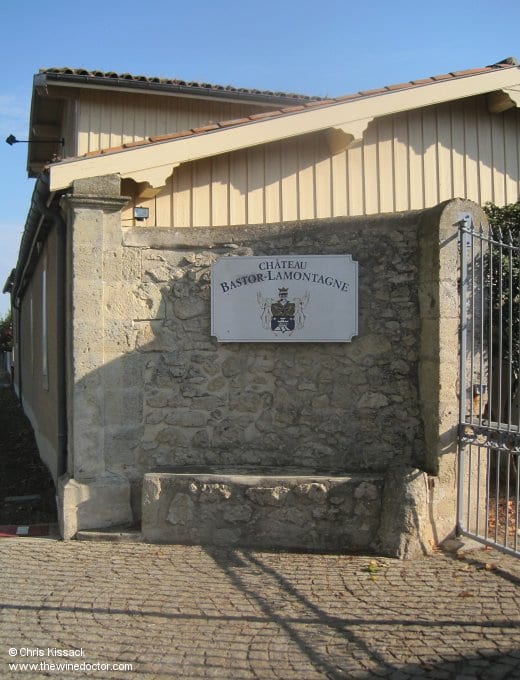 It was not until 1839 and the acquisition of the property by Amédée Larrieu (1807 – 1873) that viticulture began to dominate. Amédée, who held the title of Député de la Gironde, was the son of Joseph-Eugène Larrieu (1777 – 1859), who had purchased Château Haut-Brion from Talleyrand, so Château Bastor-Lamontagne was in very good company. Amédée married Francesca Adélaïde Amynthe Feuilloys on August 1st 1844 in Paris, and they had two children, a daughter named Marie Eugénie Marguerite Francesca (1845 – 1892) and a son, Eugène Louis Marie (1847 – 1896). By this time the estate was certainly turning out the sweet wines that are today typical of the appellation.