The banks of the Garonne have long been planted to vines. Unlike the Médoc peninsula, most of which – as every Bordeaux drinker knows – was only really made suitable for planting after it was drained by Dutch engineers during the 17th century, the land south of the city of Bordeaux has been home to the vine since at least the Middle Ages, and probably since antiquity. You can see this in the architecture; although there are notable exceptions, the finest of which among the classed growths is Château d’Issan, the architecture on the Médoc predominantly reflects the Renaissance style, elegant châteaux built to signal the wealth of their noble and, after the Revolution, their trading merchant proprietors.

South of Bordeaux, however, the picture is rather different. Here you can find 14th-century monasteries (Château Carbonnieux), ancient fortresses built to resist marauding vagabonds (there are many examples, such as Château Lamothe, Château Lamothe-Guignard, Château d’Eck and Château d’Yquem, to name just four) and tumbledown Medieval castles (such as Château de Fargues). The latter is a surprise discovery in the Bordeaux landscape, as it would not look out of place as a backdrop to any scene from Monty Python and the Holy Grail (although I should point out that the castles featured in this film were mostly Scottish, notably Doune Castle and Castle Stalker in Stirling and Argyll respectively, not that I’m a fan of the film, much). It is very easy to imagine a French soldier atop its walls, taunting the hapless King Arthur with accusations that his mother was a hamster, and that his father smelt of elderberries. 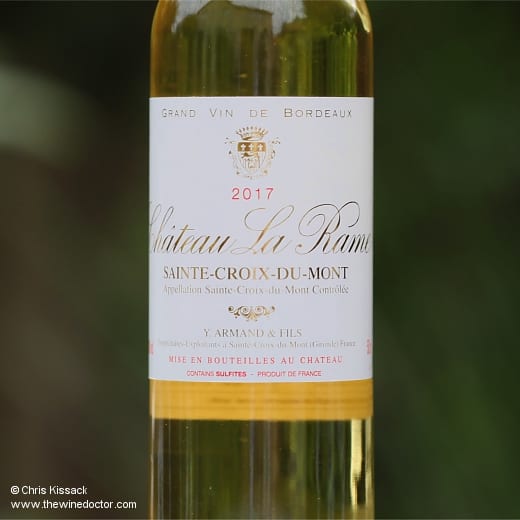 But I fear I digress, so back to this weekend’s wine and the Dutch, who did more for European viticulture than dig mere drainage ditches. Active across Europe for centuries before they took the Médoc in hand, the presence of the eager Dutch merchants promoted the development of many vineyards and directly influenced winemaking methods, the best example of which was the introduction of smaller barrels easily transported on riverboat and seagoing ship. It is largely down to the Dutch, for example, that the Coteaux du Layon vineyards in the Loire Valley were developed, and something similar can be said of the vineyards along the Garonne in Bordeaux. The style from both regions, the wines sweet and golden, was one the Dutch merchants greatly favoured.

Today two of these regions on the Garonne’s left bank, namely Sauternes and Barsac, remain well known, even if they continue to struggle with the modern preference for drier styles. Some regions, however, have slipped into obscurity, such as Cérons, which does not deserve to be overlooked, and on the opposite bank the Premières Côtes de Bordeaux appellation, and its enclaves of Loupiac and Sainte-Croix-du-Mont. The latter appellation is home to about 370 hectares of vines, mostly Semillon of course, with minor plantings of Sauvignon Blanc and the other traditional white varieties.

Prominent among the approximately fifty viticulteurs working the land of the Sainte-Croix-du-Mont appellation is Château La Rame. This is a well-sized estate, with fifty hectares of vineyards planted, of which 16 hectares are dedicated exclusively to Semillon and the production of Sainte-Croix-du-Mont. The property has long been under the direction of Yves Armand, the seventh generation of the family to take the reins, although today his children Grégoire and Angélique, along with Angélique’s husband Olivier, run the show. The harvest and winemaking is necessarily traditional, the fruit picked in a succession of tries, with vinification of the juice in temperature-controlled stainless steel, and then élevage 50% in steel and 50% in barrels, for up to eighteen months. The end result typifies the style outside Sauternes and Barsac which is often fresher, lighter and easier, in the case of the latter on the palate as well as the wallet.

The 2017 Sainte-Croix-du-Mont from Château La Rame has a bright, pale, shimmering golden hue in the glass, and just as I had hoped the nose is brimming with fruit, all smoky peach, crushed orange and citrus zest, lychee, roasted pineapple and pear, a real fruit salad with sweetness and concentration but at this stage no overt botrytis character. It continues with a beautifully fresh vibrancy on the palate, the fruit expressive but nicely framed by a tense and pithy grip, and some mouth-watering acidity. This is a delicious and easy style right now, although I have no doubt it will develop in a positive fashion in the cellar for a decade, perhaps two. It is testament to the fact that, while Bordeaux is a region where the surface is easily scratched, digging deeper into less frequently explored corners pays dividends. This isn’t quite King Arthur’s Holy Grail, but it surely comes close. Well done, Yves and family. 93/100 (27/2/20)