Château d’Issan has seen its fair share of history; many references suggest an origin in the 12th century or perhaps earlier, followed by the construction of a château here in the 15th century, where it has been suggested the English army made their final stand following defeat at the Battle of Castillon, at the end of the Hundred Years’ War. The château that stands here today is largely of more recent construction though, having been erected in the 17th century, although this attractive moated building is no less remarkable for that. Moats on the Médoc, although by no means unheard of, are rather rare among the classed growths.

By contrast, today’s approach at Château d’Issan pays no homage to this ancient history, and instead heeds the forces that move the modern market. It is the way things are run in the Bordeaux of the 21st century, I suppose. On one of my earliest visits to the region more than a few years ago I passed through the imposing gatehouse (pictured below) to take dinner with Emmanuel Cruse in the château hidden behind, and as we talked he recounted the indicators of his success in revitalising the estate. His success was not measured in vines replaced, or employees taken on, or bottles sold, or any other potential indicator of the health of the business. 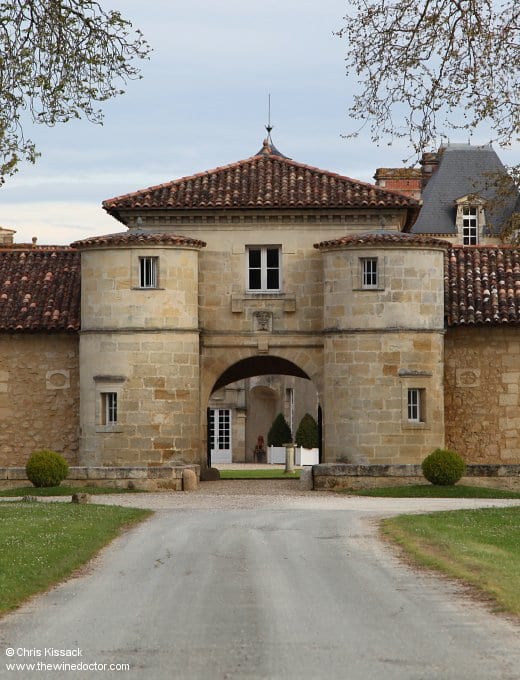 No, for Emmanuel success was measured in Parker points (which clearly dates our conversation somewhat, Parker having long since retired; well, I did say it was a long time ago), which he could rattle off for one vintage after another. Having secured a high-ranking within the appellation in a recent vintage, just behind Château Margaux and Château Palmer, Emmanuel was content, his hard work having received due recognition. I recall at the time being struck by the attention Emmanuel paid to the word of a critic. With the passing of time, though, I realised that this went on all across Bordeaux, a region where notes and scores can be vital in ensuring sales. The only difference here was that the straight-talking Emmanuel was open about it, where so many play their cards closer to their chest.