After St Julien comes Pauillac, home to what are surely the most famous châteaux in all Bordeaux. Here we can find three first growths (even if only two date to 1855, the third having been elevated to this position in 1973), no other commune in all Bordeaux can boast that. And not only were Château Latour and Château Lafite-Rothschild ranked at the very top in 1855, the latter was ranked number one of all. It is often forgotten, but the Bordeaux négociants who drew up the rankings for the Exposition Universelle de Paris in 1855, on the order of Napoleon III, ranked the four first growths in order of merit. And top of their list was Château Lafite-Rothschild.

Château Latour and Château Lafite-Rothschild sit at either end of the commune, geographical as well as qualitative guardians of the Pauillac appellation. Despite their seemingly prominent positions, however, I think it is fair to say that neither has the most imposing château in the commune. Driving north from Saint-Julien-Beychevelle, the road dips as it courses down towards the drainage channel, the Ruisseau de Juillac, and then climbs again on the gravel bed of Pauillac. This dip is the first and perhaps only significant clue that you have crossed from St Julien into Pauillac. The vines immediately on your right as you enter the commune are those of Château Latour, with its famous dovecot (pictured below) making more of a statement than the château, which is elegant but understated, and set well back from the road. Unless you are looking out for it you will probably miss it, and in this case it is the two magnificent châteaux that lie just a couple of hundred metres further on that will make you realise that you have arrived in Pauillac. Here, facing one another from opposite sides of the road, are Château Pichon-Lalande on the right (now obscuring any view of Château Latour you might have had) and Château Pichon-Baron on the left. The latter, in particular, displays the sort of grandeur and scale you might have perhaps expected from a first growth château. 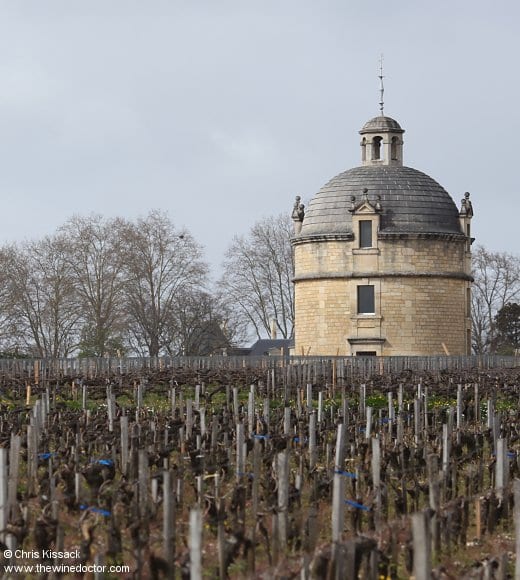 At the far end of the commune lies the other Pauillac guardian, Château Lafite-Rothschild. Again, we have understated elegance, and also a tangible connection with history, as the central clock tower around which the rest of the château seems to have grown dates to the 16th century, positively ancient for the Médoc (remember that viticulture only took off here after the drainage works of the 17th century). But again, like Latour, the château is set some way back from the road, separated from it by gardens, an ornamental lake and it is obscured from view by a row of willow trees that run along the foot of the estate. Until recently there was just one gap in the trees that provided a photographic opportunity for visitors to the region, that was until a storm in July 2013 brought down several of the trees (the aforementioned Château Pichon-Lalande lost part of its roof in the same storm), creating rather more gaps, but with new willow saplings in place I think the château will soon be disappearing from view once again.

Between these two first growths lies one of the most concentrated collections of classed growth châteaux in the entire Médoc, tightly packed into just 1100 hectares of vineyard; there are eighteen châteaux all told, as well as a number of lesser growths – cru artisan and cru bourgeois properties, if I’m still allowed to use that term – which are of interest. The vast majority of these are profiled on this site, and links can be found in the box at the foot of the page. Here I look in more detail at the appellation itself, and I start as I have done with my other communal guides, with a look at the geography, climate and terroir.