“…if they grow together, they go together…”

A report on a dinner with Tom Kitchin at Southside Scran.

For more on some of the featured domaines, see my Champalou, Domaine de Charmoise, Pierre Martin and Domaine Ogereau profiles.

I can’t remember where I first picked up this phrase, but as far as food and wine matching goes, I think it a useful mantra. It is difficult to imagine the vignerons of the Nantais, for example, planting Cabernet Sauvignon and Côt in a search for new styles of wine to match the region’s oysters. There is one very good and very obvious reason the local vineyards are populated with Melon de Bourgogne and the undeniably superior (I have to write this to keep my Nantais readers happy) Folle Blanche; these wines are perfect foils for the region’s rich diversity of seafood. Indeed, just about any white variety grown in the region works well; there is something about the sandy, salty, briny character that comes through in all the wines, even IGP Sauvignon Blanc and the Chenin–Chardonnay blends of the Fiefs-Vendéens, that calls out for a platter of molluscs and crustaceans.

This intertwining of local wines and local cuisine is a gastronomic truth that holds up along the length and breadth of the Loire Valley, from pâté aux prunes and Coteaux du Layon to Crottin de Chavignol and Sancerre. No doubt Tom Kitchin had this association in mind (as well, perhaps, as the delightful thought of filling his restaurant on an otherwise quiet Wednesday evening) when he and Richard Bouglet from Scottish wine merchant L’Art du Vin recently proposed an evening of Loire Valley food and wine, one in a series of regional Tour de France wine dinners. Five courses, all using classic Loire Valley ingredients or recipes, with a selection of local wines poured alongside. Naturally I couldn’t resist booking a table. 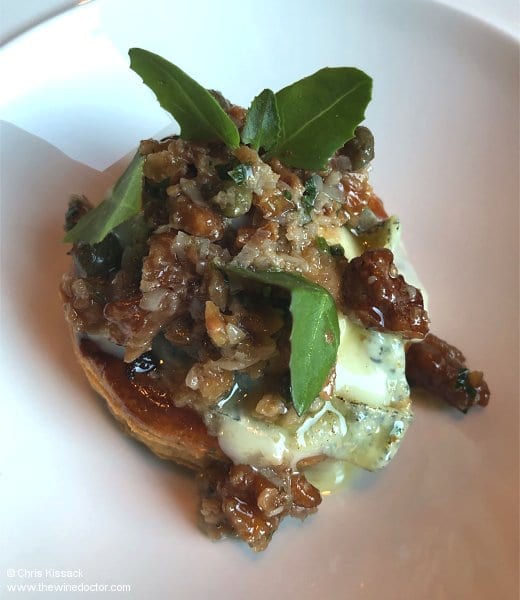 Dinner kicked off with some gougères, which are as Ligérian as haggis, but let’s not get snobby about this. The non-vintage Vouvray Brut from the Champalou family that was served alongside them was delightful. But then, to be frank, I can’t recall ever having a glass of this cuvée which I failed to enjoy; there is not just a good level of quality in the wines of Catherine, Didier and Céline Champalou, but fine consistency too. Our glasses drained (several times over, I am happy to report), we took our seats for the first of our five courses, starting with Clash Farm pork rillettes, cornichons and seasonal salad from Fred’s garden. Clash Farm, over in Stranraer on Scotland’s west coast, specialises in the British Saddleback, a rare breed of pig; as for Fred’s identity, or indeed the location of his garden, I have to confess ignorance. The rillettes was good, presented in an over-fussy slice which looked as though it had been gone over with a chamois leather before coming to table, but I guess chef has to do something in the kitchen. With this we drank the 2018 Touraine Gamay from Domaine de Charmoise, which was delightfully fresh and cool, and just as good as it was when I included it in my first Loire 2018 report.

The Sainte Maure goat’s cheese vol-au-vent with red onion marmalade (pictured above) was a bit of a delight, as I am an avid consumer of Sainte Maure de Touraine (and, to be fair, many other goat’s cheeses) but I confess I do not cook with it that often, and when I do it is not perhaps in the most imaginative manner. The combination of softened Sainte Maure, walnuts, confit-level onions and crisp pastry ticked all my boxes, assisted by the 2018 Sancerre from Pierre Martin (labelled as Yves Martin, his father, but we all know who made this wine) which showed typicité but also a nice thread of acidity, a welcome feature in a richer vintage. It was a superior wine to that which followed, the 2017 Anjou Blanc Les Equilibristes from Bouillon aux Dames, which accompanied sea trout from the Tweed with Chenonceaux sorrel beurre blanc. The trout was dense and well flavoured, and the sorrel beurre blanc (I’m not aware of any particular connection between Chenonceaux and sorrel, but stand ready to be educated by readers) was more than a match for it. As for the Anjou Blanc, this is a domaine and cuvée with which I am unfamiliar, and it was quite an old-school style, throwing golden fruit, obvious oak and maybe some tangible malolactic into the mix. It isn’t what I come to Anjou for these days, but I know other diners on the night thought it was great. Perhaps I have just been spoiled by the wines of Pierre Ménard? 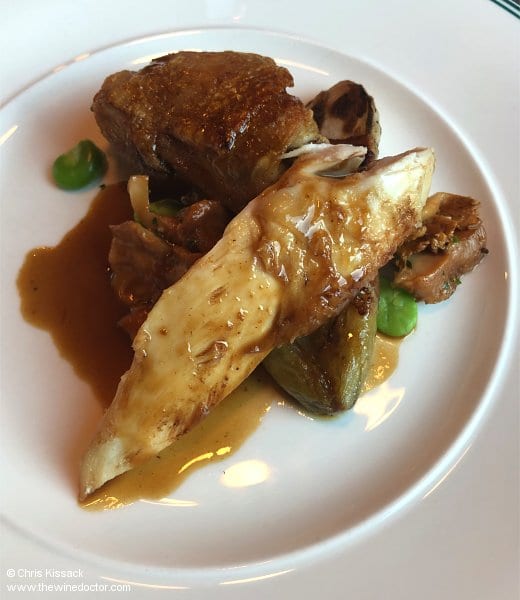 The final two courses also provided mixed pleasures, beginning with the rotisserie St Bride’s chicken with braised endive and girolles (pictured above), which provided a very safe but enjoyable combination of autumnal flavours. The proposed match, the 2017 Bourgueil Diptyque from Domaine de la Chevalerie, should have worked well in principal, but the wine was something of a disappointment. It started off a little green, perhaps a touch more than I would like, but again this is a personal belief; I’m not a member of the school which holds that Loire Valley Cabernet Franc has to be green to display typicité, but I know others enjoy this phenomenon, to the extent that their preferred glassful can be overtly herbaceous or frankly vegetal. But then came the notes of funk on the nose, palate and finish, followed by the undulations of Brett, the telltale aromas rising from the glass. I have realised over the years that I am less sensitive to Brett than I am other faults (and yes, I know Brett is not necessarily viewed as a fault by all, but I have never found it add anything to cool climate Cabernet Franc), but this example was archetypal.

We finished the evening with a Ligérian classic, apple tarte tatin with vanilla ice cream, and it is hard to know where this could go wrong. To be precise it was not the deepest or most luscious example of this classic dessert I have eaten, but it did exactly what it said on the tin. It did somewhat overpower the 2017 Coteaux du Layon from Domaine Ogereau, their entry-level wine not really set up to cope with this degree of sweetness, and I would have thought something with more residual sugar – their Bonnes Blanches cuvée, or their relatively new Quarts de Chaume – would have worked better, although of course what was poured was constrained by what L’Art du Vin carry on their list, and the need to match the wines to the budget on the night. On the whole, though, this was a fine evening, with some fine cooking, some delightful and classically styled wines and, in a packed-out restaurant, an enjoyable buzz.

Prices: Five courses with matching wines was £85 per head, which represented great value, especially as this also included, with no extra charge, the gougères and aperitif, a plentiful supply of Speyside mineral water, and coffee. Check out the Southside Scran website for more details on forthcoming events and dinners. (20/7/19)