In London for the weekend prior to a week of judging at the Decanter World Wine Awards (four days judging all the Loire entries, and one day filling an empty chair on the Bordeaux panel), I realised I had two options. Option one: be hungry and miserable all weekend. Option two: head down to Social Wine & Tapas to fill my stomach and salve my soul, and ready myself for a week dominated by Sauvignon Blanc. Would it surprise you to say I chose option two?

Social Wine & Tapas, barely a minute’s walk from Bond Street Station, is a tapas bar where the wine list focuses on the esoteric and the ‘natural’. This list was initially put together by Laure Patry, executive sommelier for all Jason Atherton’s restaurants, but she has also now taken on the overall management of this buzzing little bar. This was not my first visit here (see below for my report from 2016), and I dived right in selecting a mix of old favourites and new plates. The first of many highlights, the deliciously spicy Szechuan fried chipirones with ink aioli and lime were excellent, and an interesting contrast in terms of spice and texture to the more conventional Cod croquettes with a tartare sauce, as well as the Isle of Mull scallops with smoked butter, fennel and celeriac. 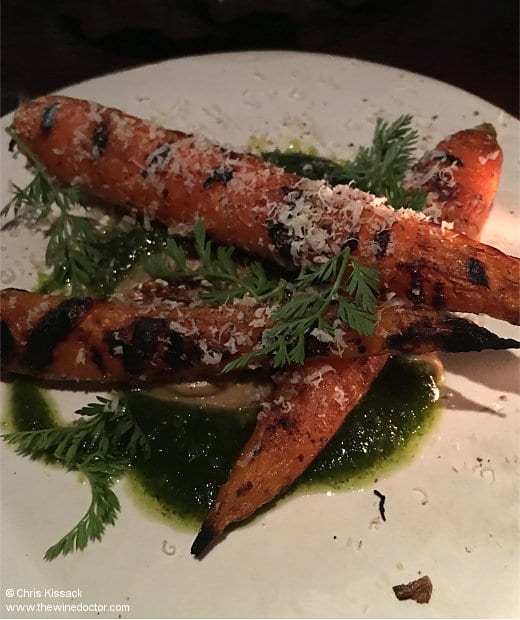 A platter of 36-month cured Ibérico de Bellota also went down well, as it should, be one of the restaurant’s more pricy plates, but some of the most surprising and rewarding dishes are those that seem to draw magical flavours from less prestigious ingredients. Chargrilled carrots with burnt aubergine, miso and walnut pesto (above) was an absolute delight, the carrots sweet and concentrated in flavour, just as they were the last time I ate here. The roasted Jerusalem artichokes with aioli and smoked paprika were smart, but (coming back to more fancy dishes once more) the 28-day aged rib eye with chimichurri dressing was better, and the pièce de resistance was the Ibérico pork cheek with beans and peppers. Fabulously melting pork cheek, rich almost creamy beans, with umami-rich juices. I know its a tapas bar, but I could have eaten this last dish three times over.

What to drink from a list that is so strong on ‘natural’ styles, featuring the wines of Nicolas Joly, Julien Courtois, Les Vignes Herbel and Jean-Pierre Robinot (among others), all at the fairly extreme end of the ‘natural’ spectrum? Happily there are some domaines listed in which I would have more faith, including Luneau-Papin, Domaine du Closel, Vincent Delaporte and Louis-Benjamin Dagueneau. I found the 2015 Berceau des Fées from Domaine aux Moines worked pretty well with a challenging array of flavours, spices and textures, and it was good to see this cuvée deliver on all its early promise.

Back in my hazy teenage years I had a Saturday job, and during my lunch break I took to wandering down the main shopping street to a small fish and chip bar l knew. When I say ‘small’, I am not exaggerating; it was little more than a counter squeezed into a tiny alcove, barely wide enough for two customers at a time. The memory of their chip butties, a huge pile of piping-hot chips secreted within a meltingly soft, buttered barm cake, remains strong, decades later. Understandably (if you are a connoisseur of the humble chip, as I am sure you are), before long I found I had become a regular, on first-name terms with Pete, the proprietor.

One Saturday lunchtime I was just about to cross the threshold of my favourite lunch venue when I spotted a one-pound note (hands up if you remember these) on the ground, just outside. Quick as a flash I made a dive for it, thinking it might supplement my meagre wages (it would have been more than enough to pay for my lunch). Quick as a flash the pound note flew away, disappearing within the chippy alcove, much to the amusement of all, but mainly to Pete and his pals, who had been entertaining themselves watching shoppers chase their pound note on a thread all morning.

Thirty years later, I turned off London’s Oxford Street and down James Street. It was a Friday evening in late September, yet the weather was more like summer than autumn, and the pavements on either side of the street were crammed with happy diners keen to celebrate the end of the working week. I was strolling along in short-sleeves, soaking up the evening rays and the wonderfully good-natured atmosphere when I spotted it. There, in the gutter, a crisp, neatly-folded five-pound note. I immediately moved to pick it up, before I then drew myself up short, with a flashback to Pete and his one-pound note. This was surely going to be a case of déjà vu?

I tried to look casual and focused in on the bank note, lying just a couple of metres from where I stood. Where was the thread? I couldn’t see it, but it had to be there somewhere. Then I looked around, checking out all these happy diners. Surely I would spot one grinning face among the crowd, the culprit poised to yank the note away as soon as I dived for it. I had just concluded that there was no such threat when, unknowingly taking advantage of my few moments of hesitation, along came a lad on a night out with pals who picked it up. He held it up to the light to check its authenticity, before waving it victoriously to his friends, and then promptly pocketing it.

There was nothing else to do other than stroll on (while muttering something to myself about striking irons), and two minutes later my dining companion and I came to our destination, Social Wine & Tapas. Inside it was no less busy than all those street-side bars and cafés, and we wound our way downstairs past hoards of diners, the majority of whom were already tucking in to their selected tapas. My stomach told me I needed to be doing to the same thing straight away, and after trying to placate it with a glass of the non-vintage Gosset Grand Rosé (sadly, there was no Loire fizz on the list), and failing badly, we got stuck into the first of our choices.

The pan con tomate didn’t look that appetising, resembling a mountain of cake smeared with glistening red lava, but one bite and my concerns disappeared as quickly as Pete’s pound note. The bread was deliciously soft yet crisp-edged, and the topping actually tasted of tomatoes, an increasingly rare phenomenon I find, bright, fresh and ripe. A platter of Teruel Serrano was very good, but the Szechuan fried chipirones with togaroshi, aioli and lime stole the show, the baby squid coated in a deliciously crisp batter. The ink aioli was perhaps an unnecessary affectation, adding little to the dish, as it was perfect with only the gentle spice of the togaroshi and a quick squeeze of lime. Looking back now this was a real highlight of the evening.

At this point we might have concluded we had experienced the best the kitchen had to offer, but that turned out not to be true; once our plates were cleared away a crispy duck egg with roasted artichoke and truffle appeared, and this also had me in raptures. The yolk was warm and oozed out as I attacked it, while the little puddle of truffle-infused cooking jus had me grateful for the sourdough bread which was put to good use mopping it all up. Considering the atmosphere here is more ‘fun and friendly’, a noisy and vibrant experience rather than the self-reverent calm one finds in so many ‘fine dining’ venues, this was another incredibly good, flavour-intense dish which showed this was a restaurant with real substance.

I soldiered on (it wasn’t difficult), washing down each dish with a mouthful or two of the entry-level 2015 Sancerre Blanc Chavignol from Domaine Delaporte, poured by head sommelier Stefan Kobold who did a great job looking after a huge number of diners on a very busy evening. I chose this wine from a list which has quite a ‘natural’ feel to it. It is very broad in terms of choice, but focusing on the Loire Valley (where I go to understand a list, and usually where I drink as well) it featured Domaine Le Briseau, Domaine de Bellevue, Jean-Pierre Robinot, Les Vignes Herbel, Nicolas Joly and Château de Fosse Sèche, all very methods-driven domaines. More attractive options included the wines of Richard Leroy, Damien Laureau, Jonathan Pabiot and Didier Dagueneau, so there were plenty of good choices even for a Loire fusspot like myself.

Next up it was back to fish, with a very nicely cooked roast cod, served with confit potato, samphire and sun-dried tomato. I love the notion of samphire, but it can be too salty, and occasionally resembles the offspring of an unorthodox mating between a pine needle and a razor blade. Happily neither description could be applied here. Alongside, chargrilled carrots with burnt aubergine, miso and walnut pesto added another flavour dimension to the evening. And this would have been enough, but then we recalled ordering the Ibérico pork loin with apricot and beetroot, which turned out to be a very wise thing to do. This had incredible intensity of flavour, but a fabulous texture too, crisp around the edges, relaxed and tender within, and it really was one of the culinary highlights of 2016. It was worthy of a picture, at any rate (above).

The days of Pete’s chip butties are long behind me (well, that’s the official line anyway) as it seems are the days of chasing bank notes down the street. But I will happily give up both for an evening at Social Wine & Tapas, which unexpectedly turned out to be the highpoint of a weekend of dining and drinking in London. In truth I think I would give them both up just for another mouthful of that exquisite and melting Ibérico pork.

Prices: Individual tapas range in price from £2.25 for sourdough bread up to less than £10 in the vast majority of cases. A few meat tapas, such as the Ibérico pork (£17.50) or Cumbrian lamp rump (£14) go higher, but these are the exception rather than the rule. The 2015 Vincent Delaporte Sancerre was £49, which was probably the best value on the entire list. (26/11/16)