Victoria is a corner of London I am not that familiar with. I have passed through Victoria Station numerous times, most recently en route to Chez Bruce, although I am often travelling in the opposite direction, into central London, after landing at Gatwick Airport. A desire to circumvent the early-morning queue for the underground, which often snakes across the station concourse, means that I have on occasion walked up Buckingham Palace Road to another underground station, but otherwise the immediate environs have remained, until recently, a blank canvas in my mind.

It looks like I might be able to add a little colour to that canvas now, having recently discovered Lorne, on nearby Wilton Road. A relatively new establishment, Lorne is home to chef Peter Hall (previously of The Square, River Café and Chez Bruce) and sommelier Katie Exton (also once of The Square and Chez Bruce). Inside Lorne is bright and airy, and although almost deserted when I arrived with my dining companion, who bore an uncanny resemblance to Farrah Fawcett circa 1978, it was soon buzzing with eager diners. It feels fun, friendly and easy-going, a sensation reinforced by the casual counter-and-stool seating option just beyond the threshold. Bypassing these Farrah and I took a table at the back of the restaurant, partly because we are prosaic traditionalists, partly to avoid being mobbed by deluded fans of Charlie’s Angels. 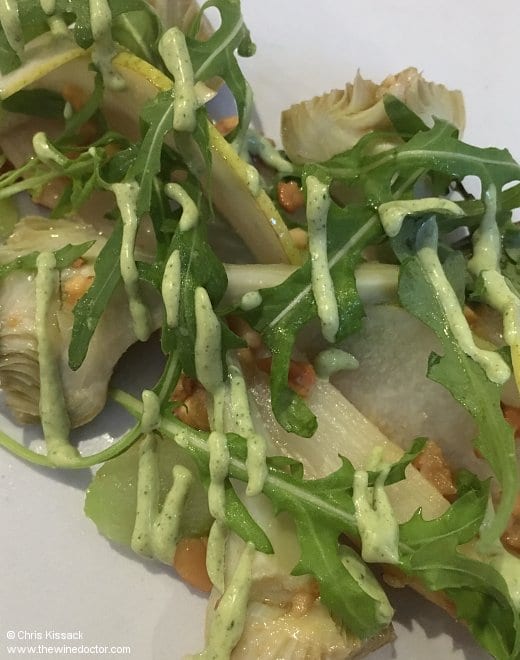 The food is in fact a little more serious, more elegant and more refined than the cheery welcome and informal setting suggests. When it came to white asparagus with artichokes, pear, rocket and cashew, it was the first ingredient on the list that drew me in, but overall this dish brought together purity of flavour, a textural delicacy and a sense of harmony that exceeded my expectations, which had largely been driven by an addiction for the succulent green (or in this case, white) spears. A pea mousse with brown shrimp, radish and preserved lemon was also well executed, with vibrant flavour in the mousse and numerous deliciously melting miniature shrimps.

Suddenly the game was on. Our chatter, which had inevitably swung towards the works of Aaron Spelling and in particular whether The Love Boat was superior to Dynasty, ceased as these high-quality starters were replaced by equally entrancing main courses. The stone bass with courgettes, cannellini and black olives worked well, a palate-soothing consensus on a plate, but the corn-fed chicken with roscoff onion tart, cauliflower and new season garlic was clearly the more thrilling of the two dishes, the melting meat, onion and cauliflower seeming more serotinal than the budding garlic, but if it makes you sigh with delight when it hits the tastebuds, what do such analyses matter? I washed it all down with the 2013 Saumur Blanc Argile from Château du Hureau, which showed a little more wood than I recalled from previous encounters. This was a vintage when Philippe Vatan was fermenting in cuve with élevage in barrel, but in 2014 he switched to both fermentation and élevage in foudre, so I think more recent and future vintages will be less and less influenced by the oak.

A pink lady apple and almond tart with buttermilk ice cream was good, even if this ode to frangipane felt a little dry and heavy, and a chocolate crémeux with passion fruit and honeycomb was definitely the better of the two choices which proves – and this is something I was beginning to realise midway through my stone bass – that none of Charlie’s Angels ever, ever, ever made a wrong decision. So I suppose, with that in mind, our evening at Lorne was always going to be a success. Journeys into London are going to take a little longer in future, as I might just have to make another detour or two down Wilton Road.

Prices: Our starters were £10 each, main courses £21 each, puddings £7 and £8. Sparkling water was just £1, with an all-evening refill available for no further charge, a really nice touch. The 2013 Saumur Blanc was £40, the Loire Valley providing good value as ever. The total bill for dinner came to just £138, so this little jewel in Victoria provides value-for-money as well as quality. (27/5/17)