The year 2020 is not one which any of us will remember for its travel experiences and fine-dining moments. I think I have crossed my local restaurateur’s palm with silver fewer times than ever during these twelve months, and in this I am absolutely sure I am not alone. There were a few fleeting weeks, though, back in August, when things seemed almost normal, provided your definition of normal can be twisted to incorporate the universal wearing of face masks and the constant strain to hear what people are saying from behind their protective Perspex screens. So not normal then. But less abnormal than the self-isolation of quarantine and lockdown.

It was an ephemeral opportunity to travel, and wine business took me to London. To be more precise, a few days of judging the Loire submissions to the 2020 Decanter World Wine Awards, which against all the odds went ahead. Covid-19 might taken our freedom, and our economic security, but it will never take away our right to hand out gold medal stickers. One restaurant that has been on my “next time I go to London” list for far too long is St John, and I could think of nowhere else I wanted to go more on this visit. A table was booked. An underground ticket was purchased (well, metaphorically, you can swipe in and out of the London Underground with any old credit card). A mask was donned. And I was off.

It’s possible that St John needs no introduction, but the last time I opened an article in that manner I received a digital ticking off from a self-appointed social media advisor on Twitter, so here goes. The London dining stalwart of St John was created by Fergus Henderson and Trevor Gulliver in October 1994, which coincidentally was the year I walked out of medical school and onto the wards freshly imbued with the power to prescribe a night-time tot of sherry for thirsty patients on the geriatric ward (yes, this was common practice). I’ve changed a lot since then, but by all accounts St John has not. Fergus and Trevor pioneered nose-to-tail eating; at a time when fine dining was either heavy French decor and giant silver domes, or the new wave of micro-molecular gastronomy, St John was serving up roasted ox heart, pig’s trotters and braised squirrel. 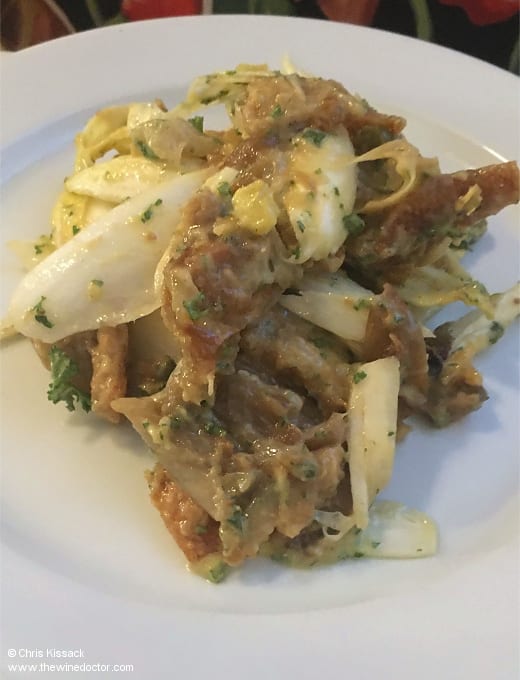 Ploughing their own furrow was naturally difficult at first, and the restaurant struggled for the first five-or-so years. But two things kept them going. One, the quality of the food on offer resulted in the restaurant and indeed the growing St John empire gradually developing a following; increasingly loyal patrons bought into the Henderson-Gulliver philosophy, purchasing their cookbooks from the St John restaurant, their bread from the St John bakery, and their wine from the St John wine company. Second, dining philosophy eventually caught up with Fergus and Trevor; respect for the animals we consume made nose-to-tail eating the done thing once again, and not merely a habit your penurious brawn-addicted great grandmother was unable to break.

Emerging from Fenchurch Street underground station into the sweltering and uncomfortably humid warmth of an August evening in London, I set out on the long trek to the restaurant. Half a mile up the hill I took a right. A few hundred yards further on, I took another right. Then I slogged half a mile downhill again, before I eventually arrived at the restaurant. At this point I realised I was now standing only a few hundred yards from the station at which I had arrived 40 minutes earlier, a distinct lack of direction combined with a wobbly GPS having brought me here by some seemingly random and circuitous route. I thus arrived having worked off in advance all the calories I was about to consume, which might not be a bad thing.

I crossed the threshold. A moment and memory to savour at any time, but especially so in this Covid-19 era.

The decor within is spartan. This used to be a smokehouse, or possibly a gangster’s den where members of rival gangs would be tied up and tortured, forced to reveal their recipe for Grandma Lou’s braised pig’s brain. Its history has not been hidden; the walls are whitewashed white, the floor painted a cement grey, with none of the fripperies that adorn some restaurants. It was only a few years ago on a visit to a restaurant in Knightsbridge that I was asked, after dinner, if I would like a “tour of the art collection”. No thanks.

There were two of us dining so I had the opportunity to taste a decent little selection of dishes. And boy does St John serve joy on a plate. One of the restaurant’s hallmark dishes is crispy pig skin, with chicory and roast shallots, and I would have happily eaten this all night, indeed all week, preferably while bathing in it. The crispy skin comes jumbled up with the equally crisp chicory, all smothered in a mix of softly roasted shallots which blends with oozing fat, giving it a rillettes-like unctuousness. This was one of the best things I ate during 2020, so simple, and yet so mouth-wateringly delicious. The roast bone marrow with parsley salad was also really good, the marrow rich and tasty, and I appreciated the extraordinary bitterness of the parsley. My only complaint is that I could have consumed the contents of another five or six shafts, as the marrow ran out long before my accompanying toast had disappeared. 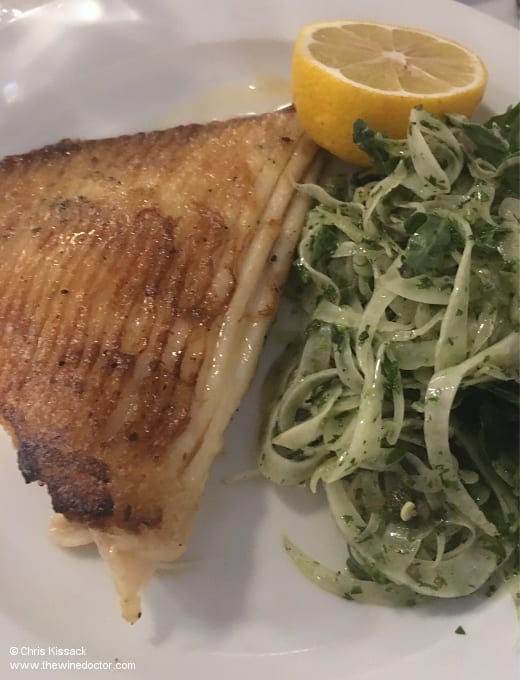 The main courses were very good, perhaps not as exciting as the starters, but still generously delicious. Roast Tamworth with carrots and trotter had a comfortable Sunday-roast feel to it, with a deliciously umami-imbued gravy. Skate, with fennel and green sauce was also spot on, its rich, meaty, perfectly cooked strings of flesh just melting in the mouth. Still not sated, I continued on with pudding, and I have no complaints about the toasted brioche, cherries and ice cream, which did what it said on the tin. The Eccles cake with Lancashire cheese achieved the same, and it was also extraordinarily filling, being about five times the size of the Eccles cake I was served as a boy (when my late father used to tell me they were filled with dead flies, which if true would perhaps be pushing the St John ethos a little too far).

The wine list at St John offers just as much interest as the menu. Being addicted to the Loire Valley I was pondering a Vouvray from Sylvain Gaudron, but was persuaded to try the 2019 Mon P’tit Pithon from Olivier Pithon, a very smart blend of Maccabeu, Grenache Gris and Grenache Blanc, which was fabulously fruit-rich. And of course there is still a Loire connection, as Olivier is Jo Pithon’s younger brother. After that we moved on to the 2018 Chat Fou from Eric Texier, a Rhône vigneron whose wines I have admired for decades but I never feel as though I really got to know them. This showed vibrant and juicy fruit with great freshness too, and it seemed perfectly suited to the joyous style of food served here. As a quick (but important) aside, these would have been served in a St John trademark, the Paris goblet, which has been the favoured glassware here I believe since the restaurant opened. Knowing this, we thought ahead and brought our own glasses; I suggest if you are planning on drinking anything finer than Buckfast that you do the same.

The year 2020 was not one blessed with dining adventures, a fact which only serves to highlight grand moments such as this dinner, a reminder of how life could and should be. I’m already looking forward to my next visit to St John..

Prices: Most starters were priced between £9 and £12.50, although the crispy pig skin is an outlier here, at £19.20. For the main courses, these start at £17.50 for grilled ox heart, up to £29 for a whole John Dory. Side dishes are charged separately, while puddings range from £5 to £9, or £12 for cheese. The wine list offers plenty of good value options. Rounding up, dinner for two including six courses and two bottles of wine here came to £180, which struck me as very good value indeed. (8/1/21)