When you find a small French town dominated by an improbably large church, there are three questions to ask yourself. How many relics does it hold? What connection to the crusades does it have? And is it on the pilgrimage route to Santiago de Compostela? The Église Notre-Dame, which towers above the rooftops of Le Puy-Notre-Dame and indeed much of the surrounding countryside, an effect amplified by its hilltop position, scores high on all three counts. Although built between 1154 and 1250, the church that stands today replaced an earlier one erected to house the Virgin Mary’s waistband, brought here by Guillaume IX, who returned from the crusades with the holy relic in his possession. Small wonder that the town soon became a regular stop off point for pilgrims on their way to the shrine of Saint James the Great.

No doubt the town catered for these pilgrims, but I doubt any of the hospitality they received was of the quality offered by Le Puy à Vins, which sits in the shadow of the aforementioned church. Calling in one lunchtime after at least two personal recommendations, my first impressions weren’t the best. While there is no denying the pretty facade, the outside seating seemed to be centred around an ancient bed stuffed with cushions, and a table made from a wooden pallet, perhaps salvaged from the local tip and brought back to life with a lick of green paint. Inside, the slightly-too-loud music seemed to shift aimlessly from the Muttrah Souk to the smoky jazz clubs of Tangiers, indeed anywhere but a bistro just thirty minutes from Saumur. Only the Bourgueillothérapie poster reassured me that I was, in fact, on familiar ground. 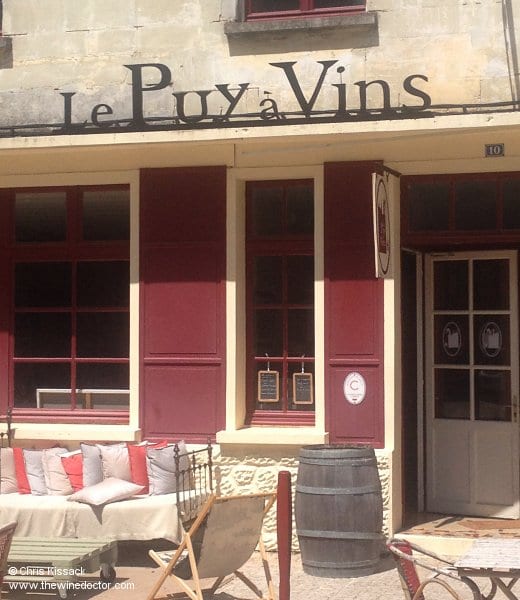 Having ordered, I whiled away the time nursing a glass of Ze Bulle Blanc Zero Pointé from Château Tour Grise, vintage uncertain; it smelt and tasted of baked apples and very little else. Wines like this are like listening to African jazz in a French bistro; neither gives any clue as to where you are. To my mind, wines from Saumur and its environs should smell and taste of their origins, Chenin Blanc, limestone and flint, but wines that are oxidised or oxidative (you can dress it up any way you want) can never speak of these things. I’ve never understood why wines such as this are any better than those that disguise their origins with late picking, cold maceration and excessive amounts of buttery new oak.

Anyway, I digress; back to Le Puy à Vins. I countered the taste of this sparkling and cidery Saumur-ish wine with some of the little pitted olives that also arrived, and began to wonder if ours would be the only occupied table this lunchtime. It was beginning to look that way, when – after a long wait, about which to be fair we were warned – two plates arrived.

To say that I was surprised by the presentation here would be something of an understatement. The funky exterior furniture, even funkier music and the exceedingly funky wine list had led me to anticipate something earthy, natural and down-to-earth. Something homely, perhaps. What actually arrived were two dishes of such elegant presentation I immediately looked up to check I hadn’t been teleported to the restaurant of a Michelin-starred chef. Clearly I had stumbled (alright, been guided to) something quite special here. First up was an entrecôte porc ibérico, with mushrooms and carrots, and this was all-round delicious. The pork was sensitively done, tender and flavoursome, yielding easily to the cut of the knife, and it rested in a flavour-packed jus which lifted every mouthful to a new level. No less impressive was the black Angus bavette, served with garlic roasted potatoes and a cream and chive sauce. The bavette steak had obviously been well marinated before cooking, its core pink and tender, its crust dark and packing a powerful punch of flavour. With the gently flavoured cream and chive sauce, and the crispy garlic potatoes, this was nothing short of heavenly. I savoured every mouthful, not wanting to clear my plate too quickly. It is a long time since I have felt this way about any lunch I have eaten.

When this course had come to an end it was already clear that this was a must-return venue. If I lived in Le Puy-Notre-Dame it would not be long before I knew all the staff by name, and they knew me as “that guy who speaks bad French who comes here every week”. Nevertheless, I thought I should investigate further, and so ordered a dessert, a simple pastry served with a selection of ice creams, the flavours of which – I went for raspberry and chocolate – were nothing short of explosive. I finished up with a pretty smart Illy espresso. Thanks to an oversight (heaven only knows how – with three covers for the entire service no-one can blame the workload) the two desserts had disappeared from the bill, which therefore came to a very affordable €53.50. I asked the bill be amended as below. Well, it’s only fair. Especially if I’m going to be a regular. (12/9/15)