The overground train lumbered and occasionally lurched from side to side as it clattered along, making its way south from Victoria station. Everything about it seemed to embody the outsider’s view of London commuting (including, perhaps, my own). It was stifling. It was crowded, any notion of ‘personal space’ having evaporated the moment the doors had slid shut, sealing us in. And despite the relatively short period of time that had passed since our departure, it was already noticeably malodorous, the simple result of too many sardines crammed into too small a can. And one or two of the sardines, perhaps having had a long day, seemed particularly past their sell-by-date.

The train eventually rumbled to a halt at Wandsworth Common Station. With a sense of relief the blade of a can opener sliced through the wall – well, alright, the doors opened – and a dozen sardines slithered forth from the opening, myself among them. Setting out in a confident manner, as if I actually knew in which direction I should be heading (I didn’t, but there is nothing worse than looking like an indecisive sardine), I went through the station and one minute later found myself looking out onto Wandsworth Common. After the crush of the train, here was a completely different view of London. I looked out over a broad green space, populated on this warm and hazy autumn evening by groups of children throwing a frisbee (I resisted the urge to join in) and families having a picnic. Behind me was a bar with a beer garden, full of happy smiling faces, catching up on the week’s gossip. It would have been worth the train journey just for this view.

But of course I wasn’t here simply to admire the view. Marching on, I turned into Chez Bruce. I was five minutes early for my table, and my arrival upset the last few minutes of a pre-service huddle, which shuffled away into a small passageway. A dozen-or-so members of staff, waiters, waitresses, a maître d’hôtel and a sommelier continued to discuss the evening’s menu, doing their best to look inconspicuous as we took our table. And generally failing.

Precision seemed to be the watchword of the evening. The service here at Chez Bruce was correct, the food very correct, the wine quite correct also. I peered at my options for the evening over the top of a glass of Serge Mathieu Blanc de Noirs, with that typically fuzzy red-apple and biscuit character that marks the blanc de noirs style, quite possibly the least precise moment of the evening. The menu is rich in terms of choice; and my interest was piqued by the crisp tartlet of quince, Galotyru sheep’s curd and grelot onions with squash purée and Iberico salchichón. The tartlet (pictured below) lived up to its billing, a corrugated cup with a texture somewhere between potato crisp and brandy snap, while the curd and salchichón were considerably milder than expected, providing a sweet and harmonious melody. My dining companion, who bore a remarkable resemblance to Angelina Jolie circa Mr. & Mrs. Smith, settled for a warm jerusalem artichoke and leek salad with melted comté, roscoff onions, bitter leaves and pecans, which was also very warmly received. 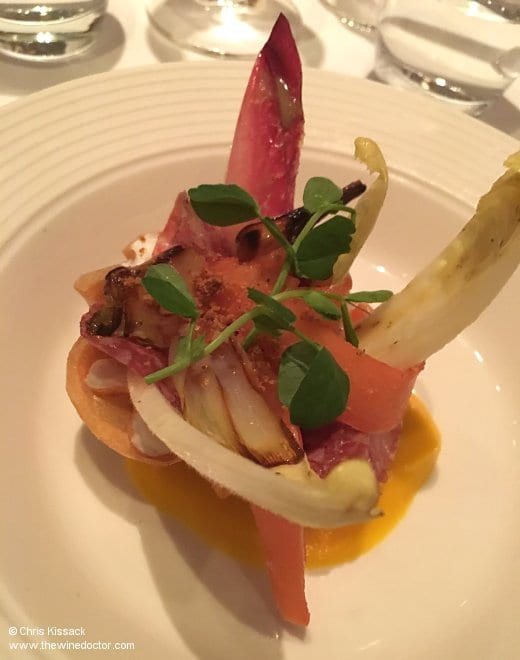 I washed down my starter with a glass or two of the 2005 Cuvée L d’Or from Luneau-Papin. Admittedly this took some time to arrive, and I was beginning to wonder if, post-huddle, the fittest, youngest waitress hadn’t been dispatched to Le Landreau to procure a bottle. After all, which London restaurateur keeps a stock of maturing Muscadet, one with over ten years of bottle age behind it? As it turns out, Bruce Poole and his sommelier do, because a little while later the bottle finally appeared. The first bottle had been corked, the sommelier explained, so she had had to dig out another, hence the delay. Hat’s off to the sommelier, for some proper wine service.

As a main course I selected a chicken breast and ballotine with hazelnut velouté, potato gnocchi, tarragon and trompettes, which felt very safe in terms of its flavour combinations, nevertheless other than a somewhat uninspiring ballotine, spiced up with a grain of gristle for extra interest, this was a very good meal. It was very correct, the nutty and mushroomy elements adding an enjoyable autumnal feel to the dish. Angelina had a cuttlefish risotto with roast scallops and king prawns, poached fennel, chilli and parsley; the obvious use of cuttlefish ink in the preparation of the dish didn’t help its visual appeal, yet the flavour was pretty smart. Our pudding choices were baked figs with mascarpone, brown sugar and marsala on one side of the table, honeycomb stracciatella ice cream on the other. The former was a dish I would describe as simple, nicely executed, and ultimately charming. The latter was rather more dramatic, the honeycomb ice cream accompanied by a brandy snap and a slab of almond tuile so large if you served it with afternoon tea you wouldn’t need a tray.

After coffee Angelina and I headed out into the night. There was no more frisbee-throwing or football games, although the beer garden was still pretty busy. The train back to Victoria Station, however, was deserted, so I can’t ‘squeeze in’ any more sardines gags. It had been an evening of interesting contrasts. On one hand the unappealing sweaty commute, like cattle headed for market, the downside of city life, and on the other hand open green spaces, laughing children and relaxed, suburban socialising, all the good things London can offer. And Chez Bruce was one more to add to the ‘good’ list, the food very correct and precise, the service warm and consummately professional. Admittedly, it was an evening of refined elegance rather than excitement, but perhaps after that train journey that is exactly what I needed.

Prices: We took advantage of a set price for three courses of £49.50 each. The Cuvée L d’Or was £50 (but don’t get excited because I think I drank the last bottle) and coffee was £4.50, not bad when a single serving is enough for two or three people. The bill in total, including two glasses of Champagne, came to just over £180. (6/5/17)