Despite not living in London, I frequently find myself in the city, and I have discovered after many years of visits that a number of my regular haunts can be reached by walking rather than by taking the underground (I know, I know, who would have guessed?). This discovery has been nothing short of revolutionary. No longer do I sweat it out running up and down stairs and escalators on the sauna known as the Victoria Line. Instead I amble along in the city’s seemingly eternal sunshine, my pace set to the tune of the bluebirds and larks hidden overheard in the trees, while greeting cheery Londoners straight from the cast of Oliver Twist and Mary Poppins as they stride along, thumbs behind braces.

The scales having fallen from my eyes, I make sure my route takes me down Lamb’s Conduit Street, one which I am sure typifies my newly-revealed London. Here we find ancient Dickensian firms of master tailors, wine shippers, funeral directors and florists. In each doorway there loiter charming urchins, ready to entertain with an impromptu yet curiously well choreographed dance, and perhaps to pick a pocket or two. Chimney sweeps, covered in soot from head to toe, scurry along from the last job to the next, whirling their brushes round as they go. It is the perfect spot to rest, midway through my trek out from Kings Cross, to soak up the atmosphere. Happily, it is here that we find Noble Rot, the wine bar established by Dan Keeling and Mark Andrew. What good fortune!

Having called in at Noble Rot more than once or twice since it’s opening in November 2015 (curiously, the same time I began to favour walking; this is just a coincidence, honest guv’nor) I have come to know the wine list really rather well. That doesn’t mean I got to know all the wines very well, because – until the list changed recently – my favourite tipple was the 2015 Folle Blanche from Luneau-Papin, a brilliant reinvention of what would have once been listed under the immediately unsalable name of Gros Plant du Pays Nantais. With the recent change, I am having to get accustomed to the 2014 Gras Moutons from Domaine La Haute Févrie instead. It’s a hard life. 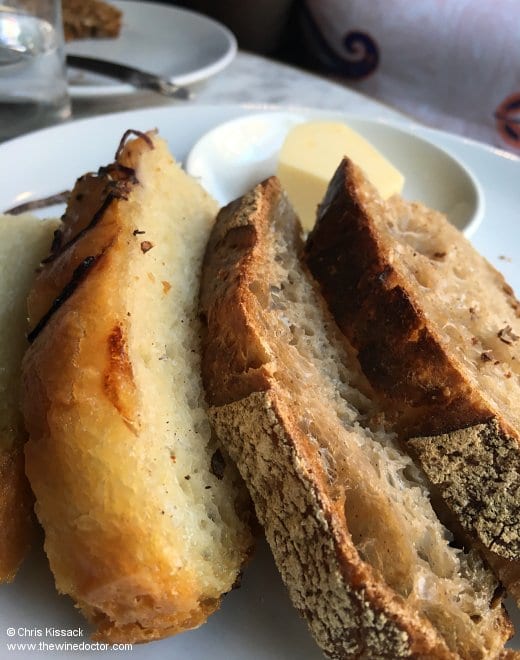 Nevertheless, I figured it was about time I called in here to eat rather than merely expressing support for their listing of Muscadet. I kicked off Saturday lunch with a couple of glasses (not both for me, I hasten to add) of the non-vintage Classic Cuvée from Hambledon, the fruit showing a slightly sour twang with a touch of bruised apple oxidation which wasn’t entirely to my taste. Happily, the food that appeared soon afterwards was. The Gloucester Old Spot shoulder with Coco de Paimpol beans was a palate-tantalising combination of grilled pork with a pesto dressing and Brittany’s most famous haricot bean, all creamy-white and very textural.

A Thornback Ray was fresh, meaty and bright in flavour, and it was complemented nicely by a very traditional tarragon-laced Véronique sauce. Both dishes were a delight, neither fine nor rustic, but somewhere between the two, heart-warming and stomach-filling. In each case there was no sense my pocket was being picked here. I should also mention the breads, some made in-house, some bought in, but all of them delicious (especially the sour dough in my opinion). I washed it all down with yet another glass of the 2014 Gras Moutons (to alleviate any Muscadet withdrawal symptoms, naturally) but I also had a snifter of the 2012 Bourgogne Blanc Clos du Murger from Albert Grivault, which had charm, even if some of that was based on its oaky jacket.

This latest but lengthier visit to Noble Rot terminated with a warm chocolate mousse which was certainly worth my time, and two espressos (from Workshop Coffee), distinctive richly and well-roasted, with some vibrantly fruity notes, especially citrus. It was an invigorating finish to a very enjoyable lunch. I am sure it won’t be long before I am calling in here once again, to check out the latest Muscadet addition to the wine list, and to ask please sir, can I have some more?