I first dined at Ondine in early 2015, and I returned here the following year. And then again the year after that. In early 2018 I found myself here yet again. Ondine is one of those restaurants I have returned to again and again, ever since realising on my first ever visit here that it offers the perfect combination of (usually) Scottish seafood and some top Loire Valley wines from the likes of Jonathan Pabiot and Vincent Pinard.

On this most recent visit I started with black-shell queen scallops from the special’s menu, surprisingly sourced from the waters around Cornwall rather than Scotland’s coast. Ten tiny scallops, still firmly adherent to their equally diminutive shells, unsullied by heat but gently cured with lime juice, chilli and coriander, made for a fabulously vibrant mouthful. Ten mouthfuls, in truth. Having said that, the lime juice was what defined the dish, and it was fairly full on; in isolation it was fine, but the powerfully sour citric acidity didn’t sit that well with the 2016 Pouilly-Fumé Florilège from Jonathan Pabiot which was otherwise brilliant, the usual high-class fare from Jonathan. After the first two or three of those ten mouthfuls I found myself pouring all that lime juice off into the ice, allowing scallop and Sauvignon to work in closer harmony. 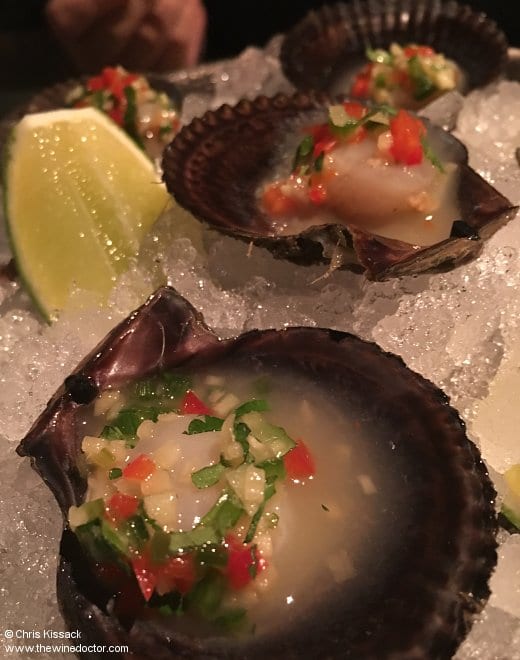 I followed this with a half-lobster thermidor, again from the special’s menu. Lobster thermidor is an Ondine staple of course, but it was the weight of the lobster that took this off the standard menu, as it was a 1.8-kilogram beast, presumably the late king of the crustaceans. As you would hope and expect this was superb. Admittedly, while the thermidor sauce was perhaps a little too focused on the grilled cheese and a little too light on freshening shallots or lighter creamy-winey elements, this was still a fabulous dish. I certainly had no problem polishing it off in entirety, even if by the last few mouthfuls it was beginning to feel like the never-ending lobster.

This was another superb meal at Ondine, and there is no doubt that I will be returning again before too long. Probably when I have a hankering for another dose of lobster thermidor.

Prices: The queenies were £12, a fairly typical price for a starter. The lobster was £90 whole, so £45 per head as we split it between two, half each. Two portions of thin-cut chips were £4 each. The 2016 Jonathan Pabiot Pouilly-Fumé Florilège was £44, the price having barely shifted since my visit in 2015, a sign that the wider world of wine still hasn’t woken up to the quality coming out of these particular cellars. Dinner for two came to £166 in total. (20/1/18)

Built in the early 19th century to connect Edinburgh’s New and Old Towns, it is perhaps no surprise that George IV Bridge is blessed with some of the city’s most resplendent architecture. At one end sits Lothian Chambers, once used as Scotland’s parliament building, while the street itself is home to Edinburgh’s Central Library, built in a fine French Renaissance style designed by George Washington Browne, as well as the rather less ornate but no less imposing National Library of Scotland. The street, as part of the New and Old Towns, sits comfortably within the zone designated a World Heritage Site by UNESCO in 1995.

About halfway up the bridge sits the G&V Hotel, looking distinctly out of place, clearly built centuries after all that surrounds it. The hue of its stone is perhaps a nod to its surroundings, but its appearance is otherwise drab and modern. Is it a hotel, or a hospital wing? It could be either. There is nothing here to tempt you inside, except for the knowledge that secreted away on the first floor is chef Roy Brett, a local lad who has served his time at the Savoy Grill in London, and with Rick Stein in Cornwall (among others), before returning to his home town to open his own restaurant a few years ago.

The restaurant is Ondine. Don’t ask me to pronounce it because I have no clue as to whether it is Ondine, like online, or Ondine, said with a comically bad French accent. I thought the latter, my dining companion the former; I expect I will eventually discover that I am in the wrong, as that usually turns out to be the case. I suppose I could have asked the staff, that is no more likely to occur than me winding down the car window to ask a nearby pedestrian for directions when lost. I am male. There are standards to uphold here.

Ondine’s first-floor location and wall of windows (one advantage of the modern facade within which it resides, I suppose) affords a view that would have any student of 19th-century architecture foaming at the mouth. Inside, the decor is more sleek, featuring a central oyster bar with pillars and surrounding floor detailed with a nystagmus-inducing mosaic of white, grey and black tiles. We took a seat at one of the nearby tables, and took to slavering over the menu, which majors on seafood, from delicate nibbles to mountainous platters.

I elected to kick off with a salt and pepper squid tempura with a Vietnamese dipping sauce, and heady memories of the loveliest platter of seafood I have ever had the good fortune to nosh through came flooding back to me. It was in Italy, on the Bolgheri coast to be precise, and having elected to spend the day on the beach which was dirty and overcrowded (I expected nothing less, naturally) I wasn’t holding out much hope for lunch. We found a tumbledown waterside cafe, all flaking paint and plastic tablecloths, and ordered from the laminated bilingual menu. My expectations were low. What arrived was the most delicious collection of lightly-battered freshly-caught squid and octopus I have ever tasted. Sometimes, freshness and simplicity are key. This is a maxim adhered to at Ondine I think, as my squid tempura did not disappoint. The dipping sauce was a little more sweet and sticky than I expected, but I would happily order this dish again. And again. And again. My companion tucked into her salad of dressed brown crab with winter coleslaw and crab mayonnaise with a similar level of glee, and having managed to prise a forkful from her grip and into my own mouth I can understand why.

Moving on, simplicity and flavour were also key to my main course, a platter of Tarbet langoustines (I assume this is a misspelling of Tarbert, on the banks of Loch Fyne, but am ready and willing to be corrected) which can be taken either grilled or chilled. I opted for the former, and soon they appeared, delicately seasoned, with a bowl of fairly strong garlic mayonnaise (maybe a little too strong?) and a hobbit’s bucket of chips to keep them company. There was nothing here I would not choose to gorge myself on again (even that mayonnaise), the langoustines (wherever they come from) both sensitively cooked and plentiful in number (I lost count, but we were certainly into double figures). It was not the most remarkable dish of the evening though, as that arrived on the other side of the table, a Scottish lobster thermidor, again with a side of fries. Melting, succulent, flavour-packed, this was undoubtedly the highlight of the entire meal.

The sweet tooth was satisfied with a treacle tart (good enough) and a rice pudding with cinder toffee which was graciously carried over from the lunchtime menu, because rice pudding addicts do have to have their fix, I suppose. To wash it down, the 2012 Pouilly-Fumé from Jonathan Pabiot, a star in the appellation I have already profiled a few years ago. It might not surprise anyone who has read my profile or recent update to learn, with my wine fascination, that the sight of his wines on the list at Ondine was a compelling reason for me to dine here. As it happens, by the end of the evening, I was won over by the whole package, gracious service, excellent food, and Jonathan’s wine in a vintage such as 2012 was perhaps a given. The evening was a success, and my companion agreed. We shall be hurrying back here at the earliest opportunity. After all, it is what happens inside that really counts, not the facade, be it peeling paint or dull modernity.

Prices: Starters £9 to £14, £12 for the squid tempura, £14 for the dressed crab. Main courses £14 to £45, £35 for the langoustines, £45 for the lobster. Cheaper options such as deep-fried haddock and chips (£17) and roast scallops and cauliflower risotto (£22) are available. At the oyster bar, six rock oysters are £18, while a seafood platter (lobster, oysters, crab, langoustines, cockles, mussels and scallops) comes in at £60. Puddings are £8. Many wines are available not only by the glass, but by the 500 ml carafe, a great option in my opinion. The Pouilly-Fumé was £30 for just such a carafe. The entire meal, choosing more expensive mains, was £150 for two. (28/2/15)